Home » News » NEWS: State Government to take Action over Unnecessary Pasting of Posters and others.

NEWS: State Government to take Action over Unnecessary Pasting of Posters and others.

A powerful  Task  Force  Committee  to Cleans Up major  Towns and Cities  is to be Establish in order to ensure  sanity in Adamawa State.

This was disclosed by the Honourable Commissioner Ministry of Information and Strategy, Comrade Ahmad Ibrahim Sajoh while  briefing Journalists at his office recently. He explained that Bill Boards and posters are being pasted anyhow without regard to the rules and regulations of the state  Urban Planning and Development Authority.

According to Sajoh, Governor Muhammad Umar Jibrilla has  approved  for the setting up of the Task  force committee or effective monitoring .

While  calling on the general public to cooperate with the  Task  Force Committee, the Honourable Commissioner  also explained that the  Committee would also clear the selling of Petroleum and Petro chemical materials  along the  streets in the state, stressing that  Mubi Town, Yola and  Ganye Local Government Areas are the major  places of concern, assuring that the  Task Force Committee  would be  fair to everybody in carrying out its assignment.

He also revealed that the  Committee would be headed by  Ahmed  Mohammad  Tukur and  Acting  General of State Urban Planning and Development Authority will  coordinate the  Task  Force Committee. 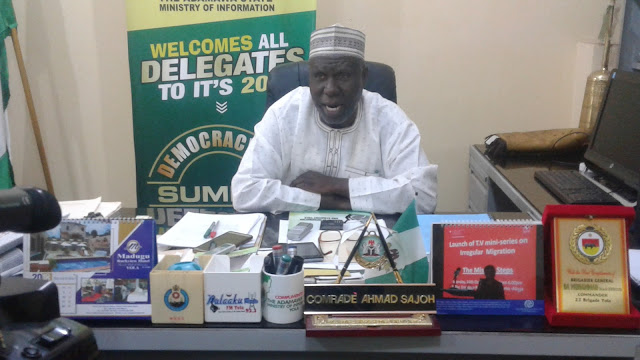