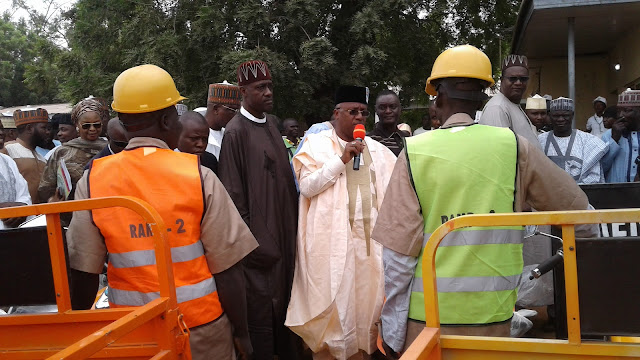 The Governor stated this during the Commissioning and DistrIbution of maintenance equipments to maintenance  team of the Adamawa State second Rural Access and Mobility Project, ADRAMP -2 .

He also revealed that other Local Government Areas including Maiha, Jada, Ganye,  Guyuk, Lamurde,  Mubi North and Mubi South will benefit from the second phase of the project.

In his welcome address ,the Honourable Commissioner Ministry of Rural Infrastructure and Community Developement, Alhaji Umar Hassan Pakka explained that since the year 2012 ,Adamawa state was selected to benefit from second tranche of the World Bank assisted project, poiting out that many people have been empowered

and charged the maintenance team to understand that the working implement signifies the much needed preparednessfor the task ahead of  them.

According to the  National  Coordinator of RAMP  the flag off of the maintenance team as well as distribution of equipment will cover Five Hundred rural roads across the state.

In a vote of thanks,  Chairman of the State Monitoring Committee,  Archtect Aliyu Bello Tarfa, who is also the Permanent Secretary in the Ministry of Rural Infrastructure and Community Developement explained that  since the inception of the present administration , Governor Muhammad Jibrilla has paid Four Hundred Million Naira as State Government  counterpart contribution for the years 2016 and 2017  while additional Two Hundred Million Naira was also approved as counterpart contribution.

In his contribution, State Project Coordinator,  Engr. Abbas Mohammed Adamu said the second Rural Access and Mobility Project began with the sum of Fifty Million Dollars while about Seven Hundred and Twenty Eight citizens in various communities in the state are beneficiaries.

He however said that Fifty Two Million Naira is to be injected into communities through the payment of Twenty Thousand Naira per kilometers to maintainance teams.