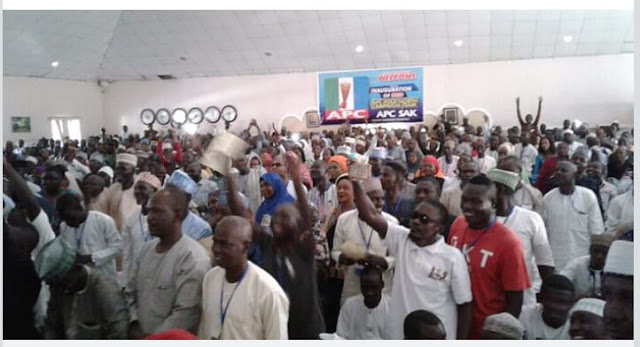 Governor Muhammad Umaru Jibrilla says victory of All Progressives Congress in the general election requires members to be United.

The Governor, who stated this  while inaugurating Buhari and Bindow APC Campaign Team for the  Northern zone held at Jika Mana Guest Inn of  Mubi Town and urged youths to shun political thuggery and violence .

The Governor also said a United party will compliment gesture of the state and Federal government in the areas of infrastructural development and provision of dividends of Democracy to the electorates at the grassroots.

Governor Jibrilla also appealed to members of the committee to work assiduously for the re - election of President Muhammadu Buhari and all aspirants on the platform of the APC and called on them to avoid anti party.

In a remarks,The Vice Chairman of the APC in the Northern Zone, Mr.  Kelvin Peter,  said the event was to inaugurate a committee that will work to mobilise for the success of the party in the zone.

According to him, there will be Twenty Five members in Fifty Seven political  wards, while One Hundred and Fifty Two members will work at the  Zonal level with memberships  comprising of political appointees.

In his contribution Alhaji Saidu Naira,  Assistant Secretary of APC who represented Chairman of the party,  Alhaji Ibrahim Bilal emphasised that all political office holders should go back to their wards to ensure the victory of the party.

While thanking the gathering Senator Binta Massi Garba appreciated the role of the Governor in the task of improving on the lot of the state and appealed to him to  consider Thirty Five percent affirmative action for women if re - elected for the second term.