Home » News » NEWS: UNHCR Partners With Students To Preach Against Gender Based Violence

NEWS: UNHCR Partners With Students To Preach Against Gender Based Violence 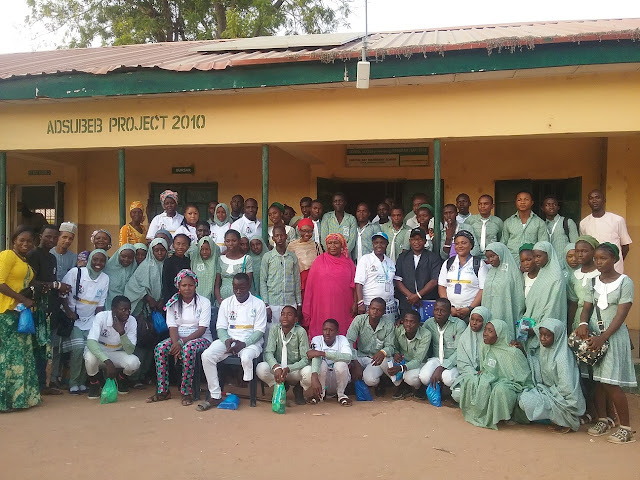 Students have been called upon to preach against gender based violence in schools, communities and the country at large, so as to live In  a society that is free from all forms of violence and discrimination against women and girls.

This was revealed by the Assistant Field Officer of the United Nation High  Commissioner For Refugees (UNHCR) Mrs. Veronica Yohanna,  at a Two-Day sensitization campaign on Gender Based Violence  to mark one of the activities of 16 days of activism, held at Aliyu Mustafa college in Yola South Local Government Area for 12th-15th of December, 2018.

The theme of this year’s campaign is “ Break the silence, SAY NO to violence against women and girls in the world of work”. 16 days of activism is an annual event specially selected by the United Nations globally to campaign against all forms of  violence and discrimination on women and girls and the need to give them equal rights both socially, economically and politically.

In an effort to catch the youth young, UNHCR in partnership with State Ministry of Women Affairs deemed it fit to take the  sensitization campaign  to Yelwa and Capital Government day Secondary Schools  in order  to  enlighten the students on GBV, speak out and report cases of all forms of violence  and descrimination against them both  in schools and within  their communities in order to live in a society that is free from violation against human right as future leaders. 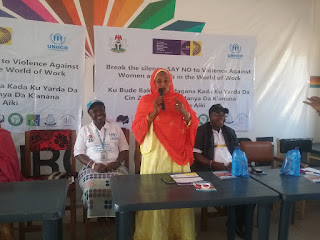 In a welcome address by the Principal of Yelwa Government day Secondary School, Mal. Ibrahim M. Tukur, said he is overwhelmed that students are being carried along in the sensitization  campaign because they are mostly the victims of GBV both at school and  in their communities. He pledge to initiate GBV club where by students will be holding meeting monthly to interact among themselves as peer educators and present their reports on issues discussed to the school authority to be shared with relevant   stakeholders and Development Partners in the State for appropriate action.

In a speech by the Permanent Secretary, Ministry of Women Affairs, Haj. Maisaratu Bello, stated that women and girls are mostly the victims of GBV but, it was recognised that Boys are also faced with these challenges which  means focus on GBV needs to be holistic. She maintained  that early marriage is also GBV and the age of  marriage should be specific to meet 18 years in accordance to the international standard.

Haj. Maisaratu further stressed that, discrimination, sexual or psychological based  on gender, work places, individual, group ‘s or displaced populations has to be eradicated to meet the agenda of 2030 Sustainable Development Goals  especially on “gender equality and leave  NO ONE BEHIND”
The Permanent Secretary announced that Adamawa State Government through Ministry of Women Affairs and Social Development will continue to partner with all the relevant stakeholders to ensure zero tolerance in sexual and gender based violence in Adamawa state.

In continuation of the campaign, on 7th  December, 2018, the UNHCR through State Ministry of Women Affairs, holds stakeholders meeting with Ward heads, District heads, people living with disabilities, legal practioners etc. Where they deliberate on how to end violence on women, girls and Boys. Also, give equal opportunities at work place. 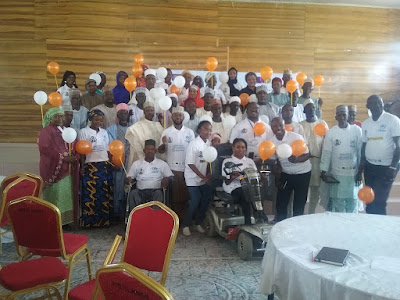 In a presentation  by a resource Person Barr. Fatima Raji, called on the stakeholders  to assist people in their various domains in reporting GBV cases to appropriate authorities for necessary action.
Furthermore, Mrs. Veronica Yohanna, challenged all the stakeholders to work In  synergy with Government and Development Partners to eradicate the dreaded menace of GBV.

Lastly, Asma’u  Muhammad of UNHCR stressed on the need to educate girl child so as to actualize their dreams as potential members of the society. She further warned against child marriage where she stated that 18 years is the international standard of giving out a child in marriage.
Highlights of the programme was questions,  answers and suggestions by the participants on the subject matter.