Home » News » NEWS: WHO in Partnership with State Government Trains 20 Social Media Users on how to Save Lives in Emergencies.

NEWS: WHO in Partnership with State Government Trains 20 Social Media Users on how to Save Lives in Emergencies. 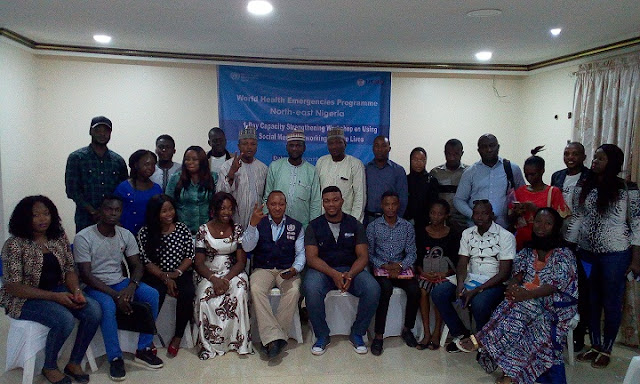 The World Health Organization in partnership with Adamawa State Ministry of Health has trained over 20 Social Media Users on how to save lives in Emergencies using the tweeter handle, Facebook and Instagram today being the 4th day of December, 2018 at Yukuben Hotel and Tourism here at the state capital. Three participants from Borno Social Media Frontiers were also in attendance.

The participants were drawn from the State Government, Private Media, Bloggers, and some active users of social media network in the state. 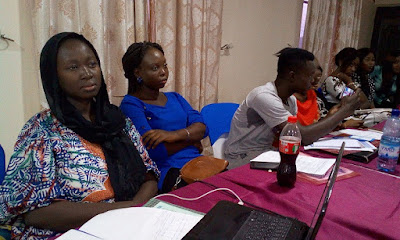 Pharm. Iyobosa Igbinovia, the WHO State Coordinator his welcome remark said “bad messages spreads faster, we are here to ensure that good messages spreads faster too”.  He had also emphasized on the need for the participants to be clear on any case or report before sending and sharing. Igbinova also said that some information can save lives while others destroy. More so, he made it very clear that it is only the Stage Government that is in a position to announce an outbreak after it has been tested and confirmed from a central laboratory before it can be accepted. 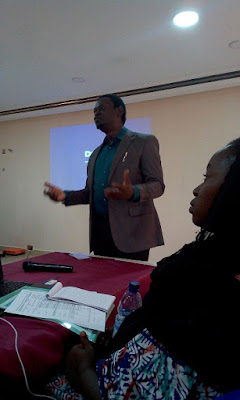 Similarly, Dr. Chima E. Enueku , WHO Health Emergencies Communication Officer briefed the participants on the objectives and expected outcomes of the training which include; reporting in the public health point of view i.e. giving medical health to the public, making their post popular and saving lives in the process.  According to him, WHO has recognized the importance of social media networks especially in the area of saving lives in emergencies adding that; “it is a humanitarian work because we do it without being paid and we will continue to do it”.

Enueku emphasized on the need for them to always investigate before posting. For instance, they should be able to know the difference between a suspected cholera and a suspected Diarrhea before publishing or sharing.

On the other hand, Dr. Jerry Pantuvo, WHO Surveillance Officer gave an Overview of WHO Public Health Emergencies in North East. He tried to explain what public health is. “it used to be referred to as hygiene,  community health, social health etc. it kept changing until it could be known as public health” he said. He also encouraged the participants to always ask question on any issue or case that they do not understand in order to avoid the spread of wrong information. Pantuvo added that risk communication on social media network will go a long way to save lives in emergencies. 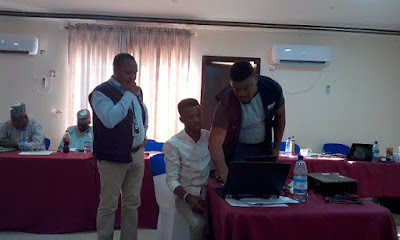 However, Chimaobi Ochemba, WHO Social Media Focal Person gave a practical guide on Creating and Managing Social Media accounts particularly the tweeter, Facebook and Instagram which to him are the major areas of concentration for now. He asked all to follow WHO Nigeria on tweeter and post the training on their tweeter account for wider audience and had also tasked those without tweeter accounts to create one starting today. More so, he listed the core social media objectives as thus;
·        Timely communication of risk,
Create content that is relevant to the general public,
·   Build relationship based on trust so that people make safe, proper health choices,
·        Increase transparency and counteract rumors, etc.
Again, he said that we live in a world full of perception and one of the job of Social Media Users is to create proper perception on public health to the general public. Another important issue discussed is the symbols that can be used on tweeter, the # tag and the @. He said this sign # is used to join or create a trend while this @ to make sense. 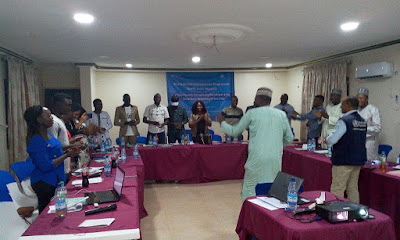 Habu , the State Coordinator of Borno Social Media Frontier gave a brief history of how the group came into existence. He said that it was formed by a group of unemployed graduates in the state to speak to reach out to government and to influence growth and development in their state. He encouraged the participants in Adamawa to do the same in order to engage themselves for the development of the state.

Lastly Dr. Chima in a closing remark appreciated the efforts of the participants and wished them a safe journey back to their destination followed by a group photo graph.