Home » News » NEWS : Governor Bindow and Others Presented With APC Flag as Candidates.

NEWS : Governor Bindow and Others Presented With APC Flag as Candidates. 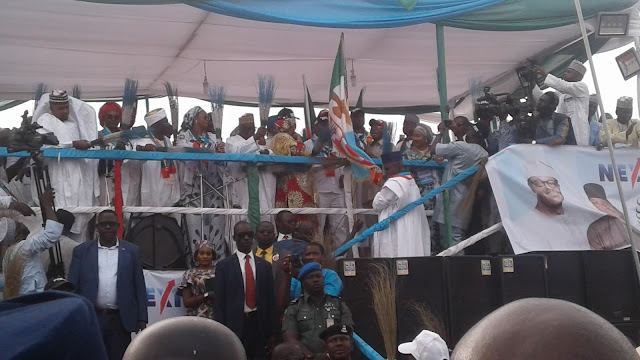 The  National Chairman of the  All Progressives Congress APC  Comrade  Adams  Aliyu  Oshiomole  has commended Governor Muhammad Umar Jibrilla  for his giant strides  in Transforming Adamawa State with Roads infrastructure  and other basic social amenities to the people  people of the state.

The  National Chairman of the  APC  stated this during  the  2019 campaign  flag  - off of Governorship  candidate  of the party and  other candidates of the party held at the Mahmud Ribadu Square Yola.

While  presenting the  APC  Flag formerly to Governor Muhammad Jibrilla as the sole Gurbernatorial  candidate ,  Comrade  Adams  Oshiomole commended  President Muhammadu Buhari for restoring the  hope to the electorates. ""On behalfof the National  Working  Committee, I here by presents to you Senator Muhammad Umar Jibrilla Bindow the APC  Flag as the Party's  candidate.

He however  received  Decampees from  other political parties who surrender their  Governorship  ambition to  Senator Muhammad Umar Jibrilla.

In their separate remarks the Secretary to the  Government of the Federation Boss Mustapha and Director  General of  Buhari  Campaign  Organisation  Cheif  Rotimi  Amechi  have assured Nigerians that with the  reelection  of President Muhammadu Buhari and Governor Muhammad Umar Jibrilla  more Democracy  Dividends would be  provided as well as maintaining  of Peace and security.

According to  Cheif  Rotimi Amechi the 2019 general  election is going to be  between  the rich and  the poor, maintaining  that the  Buhari  led administration has shown  clearly  thst the masses of  Nigeria have a  rightful  and purposeful leader. 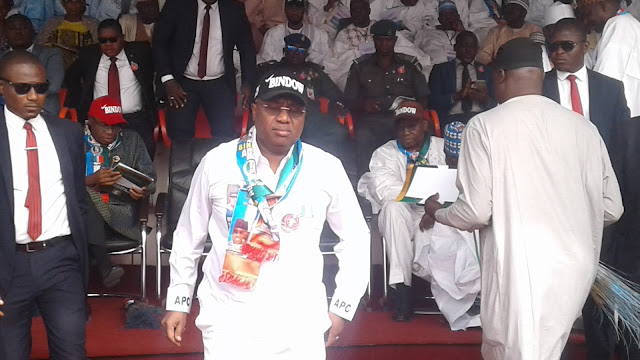 Addressing the mammoth  crowds, Governor Muhammad Umar Jibrilla said with the  presentation of the  party' s  flag, the journey has now begins and assured to the electorates of Adamawa State  that his administration is for the masses. .

The Governor also said that  his government is poised to provide the electorates with basic social amenities to their  doorsteps, stressing that Adamawa  people  were his more  concerned, and thanked the  entire  citizens  for the continuous support and cooperation being extended to  his administration at all times.