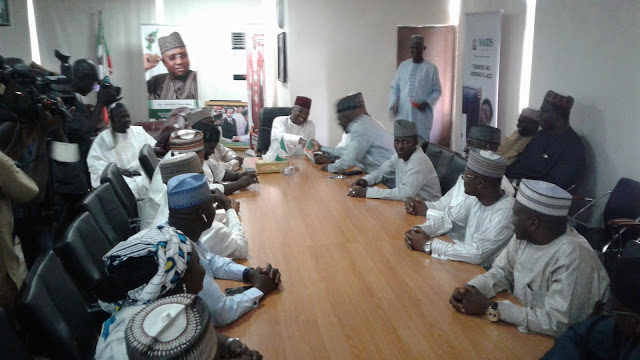 The Deputy Speaker of the State House of Assembly  Hon.  Lusambani Mijah Dili who led other law makers for the Budget submission during an extra ordinary council session presided over by Governor Muhammad Umaru Jibrilla at council chamber Government House Yola.

Lusambani Dili, who also represents Demsa in the state house of Assembly, said this is to meet the aspirations of the people of the state considering areas of needs.

He assured the Governor of mutual working relationship in delivering Dividends of Democracy to the doorstep of the people of Adamawa State.

The Deputy Speaker used the forum to congratulate the Governor on the occasion of New Year Celebrations.

While receiving the Budget appropriation Bill ,Governor Muhammad Umaru Jibrilla expressed appreciation to the law makers for the speedy passage of the 2019 Budget,Tagged  " Budget  Of Next Level "

The Governor also appreciated the role of the Legislature in identifying with the challenges considering the increment of Fourteen Billion Naira to meet the aspirations of the people of the state.

He used the forum to wish the law makers a successful electioneering  outting in the year 2019.

The Governor  had also  congratulated the Law makers  over the  recent changes in the leadership of the  House, where Honourable  Lusambani Mijah Dili was elected  Deputy  Speaker  and other key officers of the House.