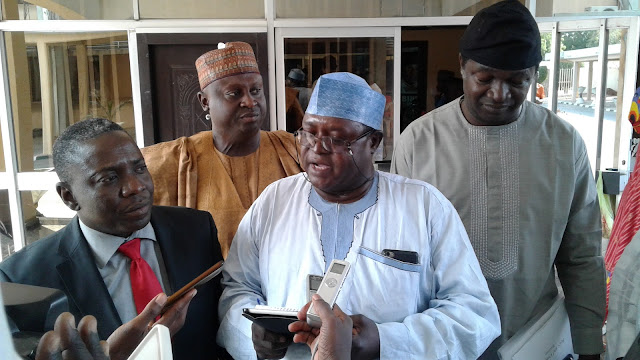 Governor Muhammad  Umar Jibrilla has  presided over the  first  State  Executive Council  Meeting for the  year 2019 at the  Council Chambers  of the Government House Yola today.

While briefing Journalists at the end of the  Executive  Council Meeting, the Honourable Commissioner,  Ministry of Information and Strategy Comrade Ahmad Ibrahim Sajoh who was represented by the  Permanent Secretary   Mr. Polycap  Ayuba  along  side  State  Attorney General and Commissioner for Justice BSD Sanga and Honourable Commissioner Ministry of  Water Resources, Alhaji  Isa Halilu Ahmed explained that the EXCO  had received the approved 2019 Budget  Appropriation passed by the State  House of  Assembly  recently.

According to Mr. Polycap  Ayuba,  the Council had  deliberated  and agreed on the redeemed  pledges being  made during the  emblem appealed fund within the  shortest period of time.

The  Council also  agreed  that there  should be a continuous  cooperation  between the  Honourable Commissioners and their  respective  Permanent  Secretaries for the  overall development of Adamawa State.

The  EXCO  however  called on the people of the state  to continue to support the present administration under Governor Muhammad Umar Jibrilla in order to move the  state  forward.