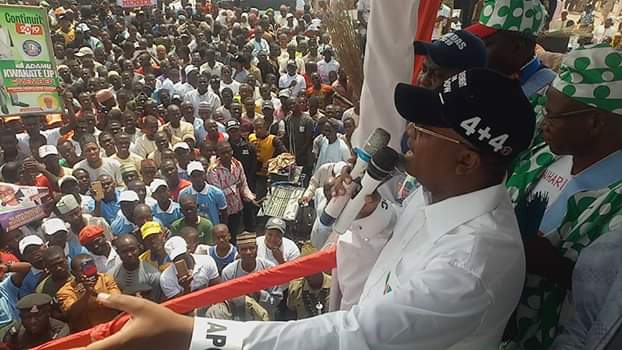 In continuation of his electioneering campaign  rally in the Southern part of  Adamawa state,  the  APC  Governorship  candidate,  Senator Muhammed Umar Jibrilla promised the people of  Mayo  Belwa , Demsa  and Numan Local government areas  for more dividends of   Democracy to the electorates of the  area if given the mandate for the second  term  as Governor of Adamawa state.

The Governor stated this while  addressing mammoth  crowds  of  All  Progressives Congress APC  Supporters  from the area and solicited their votes  during the forthcoming  general  election.

At Mayo  Belwa  local government,  Senator Muhammed Umar Jibrilla  vows to construct a  world class  Hospital  to the people of Mayo-Belwa as well as  provision of other basic social amenities if voted into  office, pointing out that  Mayo-Belwa would be  the first  beneficiary of his Government in terms of provision of  dividends of Democracy.

The  Bindow  Campaign  Train was also  at Demsa  and Numan Local Government  Areas  to canvassed  support from the electorates and he explained that  Numan  Federation  has been considered  as the determining  factor of any political  aspirants in Adamawa state. He  maintained that the  APC  led government is performing  wonderfully in terms of good governance  despite  the meager resources being allocated to the  state. 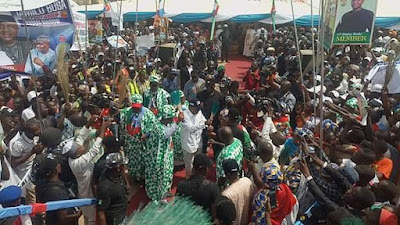 While  addressing the mammoth crowds, the Director General of  Bindow  Campaign  Organisation,  Chief  Felix  Tangwami  ' Garkuwan Mbula ' have urged  the electorates from the  Zone  to come out  enmass  and vote APC  at all levels  in veiw of the  developmental  strides of the  present administration  led by Senator Muhammed Umar Jibrilla in the area.

The Director General of the  Bindow  Campaign  organisation  also  revealed that  all the votes from Numan  Federation  will be surrendered to Governor Muhammed Jibrilla  Bindow and President Muhammadu Buhari for their efforts in ensuring good governance has prevail in Nigeria.

Also in their good will messages, the  Adamawa state  Chairman of the  APC Alhaji Ibrahim Bilal  and other key stakeholders from the area  have resolved to  work  assiduously for the victory  of the party  at all levels in the state.

The  Chairman of the party had also received  Thousands of decampees from other political parties to the  ruling  APC, and assured that  they will continue to support the present administration under Governor Muhammed Umar Jibrilla in order to  transform Adamawa state  better .

They  however  attests  that Governor  Bindow  provide the  zone with  Road infrastructure and other social amenities in order to  uplift the living  standard of the  people of Adamawa state.

Governor Muhammed Umar Jibrilla  and entourage had also paid  a courtesy call on the  Hama Bata Homun Alhamdu Gladson Teneke, Hama Bachama Homun Honest Irimiya Stephen and the  District  Heads of  Mayo-Belwa  and Mayo Farag at their  palaces  where the  Royal fathers  assured the Governor of their that the  2019  general  election  would be a  different one in the  zone.