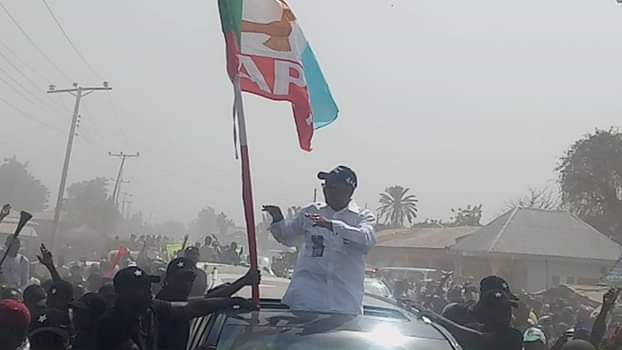 The people of  Shelleng  and Guyuk Local  Government Areas  have endorsed Senator Muhammed Umar Jibrilla as their sole Governorship  candidate in 2019  general  election.

The  electorates  made the pronouncement when the All  Progressives Congress APC  Governorship candidate takes his campaign  train to the  area to canvass  support and votes of the electorates during the  forthcoming  election.

Governor Muhammed Jibrilla had told the people  that he was at Shelleng  to intimate  his mutual friends, brothers and sisters in the  Two  local government areas  and seek for their   mandate in order to continue with  the  developmental strides being carried out across Adamawa state. 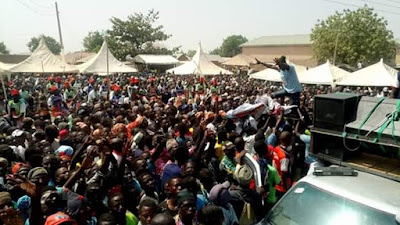 He explained that his government has performed  wonderfully by fulfilling  campaign promises made in 2015 to the electorates of the area, expressing  that both Shelleng  and Guyuk Local government areas are home to the  Governor.

He also reiterated his administration commitment to provide basic social amenities to the people of the area as well as  Reconstructing  the Cottage  Hospitals in Shelleng  and Guyuk.

The Governor  however  described  the Traditional institutions as  custodians of cultural Heritage and Values in the society, maintaining that the  diverse  cultural heritage  is a source of  strengths of every society  as well as  their identity.

Governor  Bindow  also  presented  a Car  document to  Kwandi  Nunguraya who was represented by the  District Head of  Guyuk as a mark of honour  and respect  to the Royal father  and appreciated  their good advises to his government, revealing that  the Road  linking  Chikila will be constructed very soon by the government.

In  his speech, the  Director General of Bindow Campaign Organisation Chief Felix Tangwami said that the  APC led government  mantra  will continue to  fulfill  its campaign promises to the electorates.

Chief Felix Tangwami however  presented  Governor Bindow to the people of  Shelleng  and Guyuk  and solicited for  their support and  votes during the forthcoming general election in the area.

Also in their good will messages, the Adamawa state  Chairman of  APC,  Alhaji Ibrahim Bilal and other  stakeholders from Guyuk  and Shelleng have vowed  to support the  Governor for actualizing  his second  term bid . 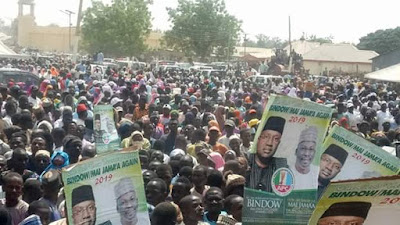 Governor Muhammed Jibrilla  and entourage had paid a courtesy call on  Amna Shelleng His Royal Highness Alhaji Abdullahi Isa Dasong  and Kwandi  Nunguraya  Chief  Wilfred  Kimde  who was represented by the District Head of  Guyuk at their palaces  where the Royal fathers assured the Governor of victory in the  forthcoming  election in their domains.

They also commended the Governor for providing  physical  infrastructure and  promised to ensure that the  election would be  Hundred  per cent  in favour of the APC candidates.
12:44
adamawadailyreport@gmail.com
news update
Email ThisBlogThis!Share to TwitterShare to Facebook