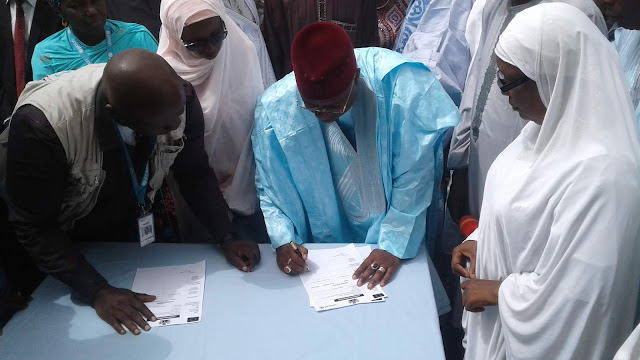 The Adamawa State Government  has signed  a Memorandum of Understanding with UNICEF and European Union for the rehabilitation of One Hundred and Forty Primary Health care facilities in Adamawa state .

The Governor Muhammad Umaru Jibrilla  who  signed the Memoranda on behalf of the state Government in a colourful ceremony held at premises of Ajiya Health  Clinic  in Yola North, said he is overwhelmed by the  signing of the Memorandum of Understanding between the State Government , UNICEF, and the European Union.

Governor Muhammed Jibrilla  explained that his Government will continue to accord the health sector the needed priority and pledged that government will sustain the pace of development in the sector even after the expiration of the project.

Governor Jibrilla also  said that more Health care personnel would be employed and the renovation will be done in phases.

In her remarks, the Honourable Commissioner Ministry of Health, Doctor Fatima Atiku  appreciated the support of Governor Muhammad Umar Jibrilla  which led to the current intervention by the development partners.

explaining  that other details of the agreement in the Memoranda include provision of Water and Electricity, and equipment for enhanced service delivery.
Doctor Batulu however said that about Six Thousand Four Hundred Health workers are required to compliment the current effort to ensure quality service delivery in the health sector in Adamawa state .

The Representative of UNICEF, Mr. Oluseyi Olasande said they have enjoined close relationship in the last Four years with the state government pointing out that Six Hundred communities have been reached with Seventy Two trained health workers on integrated health care.

He also said  that One Hundred and Forty health facilities will be renovated while another project tagged " Karama Project " aimed at assisting children from severe Malaria, will commence soon.
The first intervention under the arrangement enables the Adamawa state Government take possession of Hundreds of hospital equipment, which aided in the ratting that placed the state One of the best in Health care Delivery in the country.
08:12
Adamawa Daily Reports
News
Email ThisBlogThis!Share to TwitterShare to Facebook