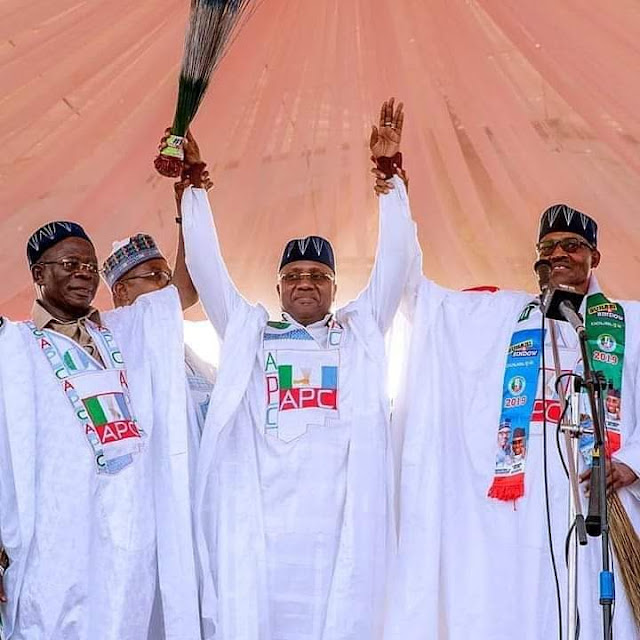 President Muhammadu  Buhari says his administration will continue to ensure that  lives and properties of  of the ordinary citizens  are being fully protected.
The President made the pronouncement during  his nation wide campaign  rally held at the  Mahmud Ribadu Square, Yola.

While  addressing the mammoth crowd, President  Buhari  stated that fighting Corruption and  Insurgency will continue to be the top most priority by his Government, explaining that the  Federal Government would  build  railway lines as well as  constructing more roads and provision of portable Drinking  water to  the Nigerians will remain resolute  by his Government.
He solicited for the support and cooperation of the people of Adamawa state to  vote for the  All  Progressives Congress  APC candidates at all levels in  order to  continue to  provide Democracy dividends to the electorates  at the grassroots.

In their separate remarks, the  National  Chairman of  APC  Comrade Adams Oshiomole, the Director General of  Buhari  campaign  organisation  Hon. Chibuike  Rotimi  Amaechi, Secretary to the Government of the Federation Barrister Boss Gida Mustapha and Retired General  Buba  Marwa have said that  president  Muhammadu Buhari is the only solution to Nigerian problems and  guaranteed  the electorates  that the  All Progressives Congress  change mantra  would be in the  interests and  of beneficial to the masses of Nigeria. 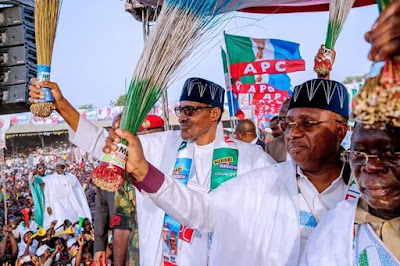 The  National  Chairman of the APC  Comrade  Adams Oshiomole  has presented Senator Muhammed Umar Jibrilla  as the sole Governorship  candidate  and flag bearer of the party in Adamawa state.

Also in his remarks, the  APC national  Vice Chairman North East, Comrade Mustapha Salihu had announced that  about Twenty - Seven  political parties  in Adamawa state have already endorsed  Muhammadu Buhari as their presidential  candidate and assured their support and solidarity in order to gain victory during the  forthcoming general elections.

In his speech, Governor Muhammad Umaru Jibrilla had thanked the entire people of Adamawa state for the kind  reception accorded to President Muhammadu Buhari in  Adamawa state.
Governor Muhammed Jibrilla also  appreciated the  teeming  supporters and  APC  loyalists for gracing the  campaign  rally of President Muhammadu Buhari  and assured that  APC  as a party would be a  victorious in the forthcoming general  elections. 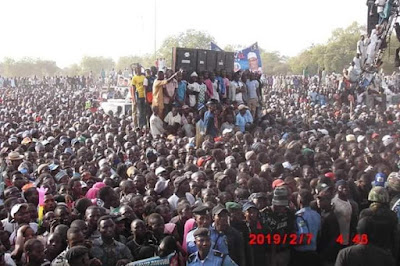 President Muhammadu Buhari and  entourage  were at the Palace of  Lamido Fombina His Royal Highness Dr Muhammadu Barkindo Aliyu Musdafa  along side other first class  Emirs and Chiefs of Adamawa state  to paid them   a  royal homage,where the Royal fathers assured  President  Buhari  that the  people of Adamawa state  would  massively vote in favour of APC  and President Muhammadu Buhari for  the betterment of the  the state  and the country in general.
10:25
Adamawa Daily Reports
news update
Email ThisBlogThis!Share to TwitterShare to Facebook