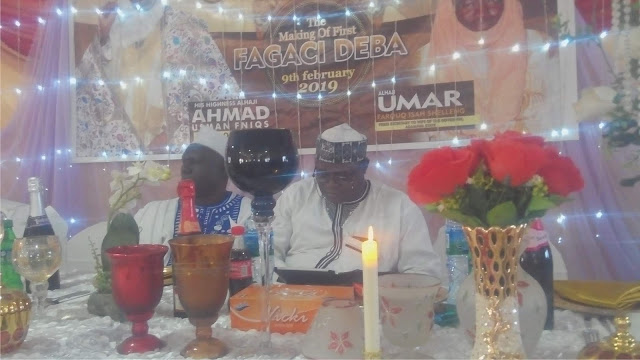 Umar Isa Shelleng, the Press Secretary to the first lady of Adamawa state turbaned as the first  Fagaci of  Deba on the 9th of February 2019 by the Emir of  Deba,  HRH Alh.  Ahmad  Usman. 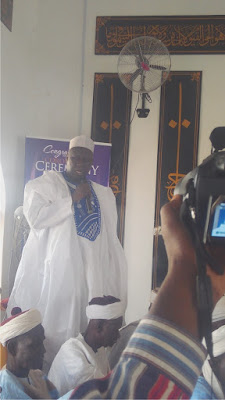 Governor Bindow speaking  through the Hon. Commissioner of Information  and Strategy, Hon. Ahmed Sajoh during the ceremony  at the palace of the Emir  of Deba said, Bindow sent him to come and thank the Emir and the Emirate  of  Deba for recognizing and making their own Umar Isa Shelleng  the first Fagaci of Deba. He added that, a honor to Shelleng is a honour to Adamawa State  “a good son will always get a deserve love from his people, parents and society at large. Umar Farouk Isa Shelleng is indeed a good one, he is a colleague, a man of  good character, and a person that possesses  leadership qualities”, the Commissioner added.

He urged  Shelleng  to remained obedient, exhibit  all the  good qualities  being expected from him, he also urged him to use his experience and knowledge as a media man to make the Emirate known to all, protect its interest, maintain  good relationship between Yola and Deba.

Governor Bindow  appealed to the people of Deba to imbibe  peace with one another as traditional institutions are good tools that can be used to sustain peaceful coexistence among societies.  He used  the medium to  appeal to governments at all levels to recognize the existence and the importance of traditional institutions especially toward ensuring the safety and security of the lives and properties of  the common man. He added “ in Adamawa  for instance, we work hand in hand with traditional bodies like ward heads, village heads, district heads and the first class chiefs”,  we give them support and courage to work toward ensuring the safety and security of our people, and the results  are out there for everyone to see.  Sajoh added. 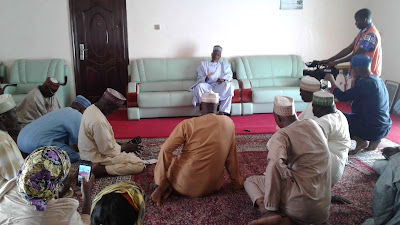 Speaking during the occasion, HRH Alh. Ahmad  Usman, the Emir of  Deba  said I approved the title of ‘Fagaci Deba’ in honour of  Umar Isa Shelleng because he deserve  it. He thanked Governor Bindow  for honoring  his invitation by sending a high powered delegation including Hon. Commissioners and Permanent Secretaries to represent him in spite of  the ongoing electioneering campaigns.

Alh. Ahmad  Usman further revealed that the representation portrayed a good  relationships and a prove of what we saw  in Shelleng.

The Emir added that, the title given to Shelleng is an added responsibility “You need to get prepared  for the job ahead”.
For the advices and the appeals made by  Bindow, the Emir said  we are grateful to the government and people of Adamawa , he added “ surely if we  used  them  it will  take  us to greatness, he prayed  for a  successful polls  and  thanks everyone that attended  the ceremony. 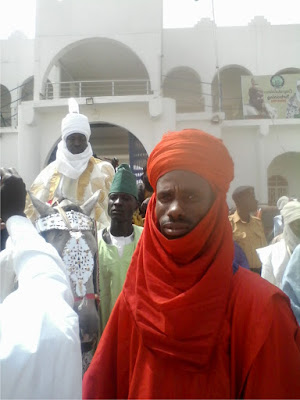 Galadima Deba Speaking earlier,   said that  Umar Isa Shelleng is the first Fagaci of Deba, he is expected to serve as a good adviser to the emirate, protect its interest and make the emirate known to all.