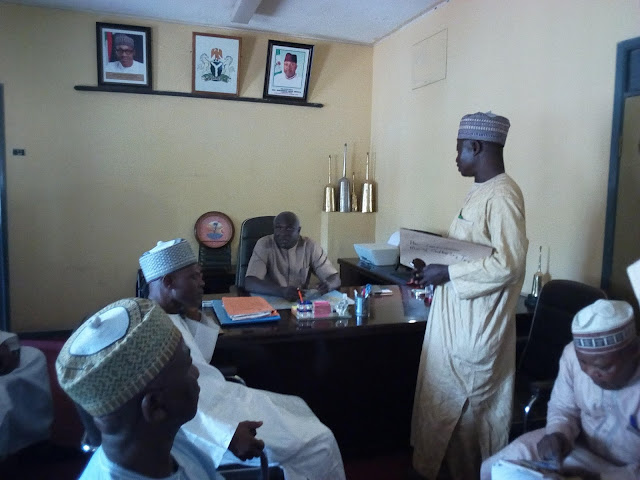 The Transition Committee set by the incoming Governor elect of the state, Ahmadu Fintiri were at the State Ministry of Culture and Tourism today. The group led by the Chairman Mr.  Joseph kwagi  said they were at the Ministry for fact findings on the work and all the information needed to assist  the incoming administration. They will alias with the Government side by side so that  the incoming Government would have a document on things on ground. They are not the only ones but all Ministries have such committees, so its not a witch hunt but are only seeking for information to help the incoming government.

The Government on seat and the incoming have sat to agree before the committee is considered, he said.

Basically, fact findings that will be needed to help the incoming Governor, to enable him have a good information to start work with and also to enable him have complete support of the staff of the Ministry giving ways to which the new government can improve on what the out going government have left. Also,  to improve the state as to social services can add to move forward and create revenue generation for the state.

While responding, the Hon. Commissioner, Dr. John Ngamsa said, the Ministry if properly put to use can generate a lot of revenue. He said Ministry of Information and  Ministry  of Culture should be integrated in order to yield  better achievement, adding that he is ready to work with who so ever that is coming in as the Governor of the state. He also said its a welcomed development for him as by next week he will be opening an office for research and documentation.

He said although, he  has few regrets of things yet to be done but he believes it will work out well. The Permanent Sectary,  Culture and Tourism Mr. Titus thanked them for coming and commended them on the work they are embarking on. He said the Ministry is ever ready to work with them so that they can move the the state forward. Any information needed will be provided to them..