Home » News » UP DATE ON RoLAC: British Council Supports State Dialogue on the Implementation of ADSACS and ADSJSR Action Plans.

UP DATE ON RoLAC: British Council Supports State Dialogue on the Implementation of ADSACS and ADSJSR Action Plans. 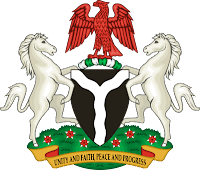 The Rule of Law and Anti-Corruption in collaboration with the State Government  held a 1day State Level Dialogue with CSOs and Media organizations on the implementation of the Adamawa State Anti-Corruption Strategy ADSACS and Adamawa State Justice Sector Reforms ADSJSR Action Plans today being the 4th of April 2019 at AUN Hotel here in Yola. 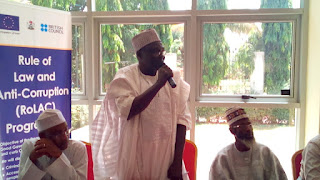 While declaring the meeting open, the Head of Service Adamawa State, Mr. Amos Edgar who was represented by the Permanent Secretary of the Admin. Department, Office of the HoS, Mr. Ibrahim Emmanuel said that discussions these days worldwide  are almost about rule of law. His words; “Discussions these days worldwide is almost about corruption, rule of law, accountability and service to mankind, this can only be possible when we have a  corrupt free society”

He also announced to the gathering that Anti –Corruption Units have been established in all the MDAs across the state adding that the dialogue with CSOs and Media will go a long way in the implementation of the programme in the State. 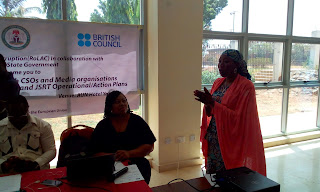 Similarly, the State Coordinator of RoLAC, Barr. Hafsat Abdullahi in her opening remark gave a brief background and the laudable achievements recorded by RoLAC in the State. She welcomed all Stakeholders to the Dialogue and wished them successful discussions.

On the other hand, The Hon. Attorney- General & Commissioner for Justice, BSD Sanga who was represented by the Solicitor General &Permanent Secretary MoJ who is also the Chairman Justice Sector Reforms Team Dahiru M. Raji  in a welcoming remark said he hope that they will have a good discussions so that at the end of the day, they will be satisfied with their actions. 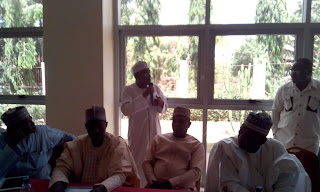 Dr. Ada Eze, a consultant with the British Council while moderating the meeting told the gathering that the ADSACS Action Plan has been validated. “Presently, the Action plan of ADSACS has been validated and then we did the role definition of the implementing bodies. Most of the Permanent Secretaries here were part of the process as the CSOs and the Media, and they went ahead to develop the M&E Plan. That is the only document that has not been validated”. 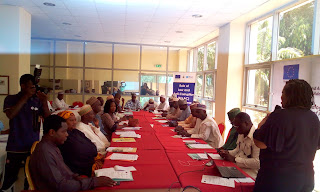 Dr. Eze said that the challenges of Nigeria is not the development of policies and Laws but their implementation adding that that is the more reasons why the CSOs and the Media took it upon themselves to see that something is done correct the attitude. She explained that they have identified where they can collaborate with MDAs which is why the relevant MDAs are here. They have also categorized the activities in the Action Plans of ADSAC & ADSJSR into short term, medium and long term because of the nature and gravity of the activities and have decided to start working on the short term activities which are mostly advocacy, sensitization and awareness. And, have also made their recommendations for each MDAs.

However, this dialogue was based on the selected activities of implementation and the recommendations made by the CSOs and the Media.

Representatives of CSOs and that of the Media presented the selected activities as well as the recommendations to the MDAs and it became the subject of the dialogue. There were lots of reactions from various MDAs and that made the dialogue more interactive and interesting. At the end of the day the purpose of the dialogue was achieved.

Adamawa Daily Reports gathered that the 1day State Dialogue was supported by RoLAC’s Component 4 which is ; Citizens’ engagement in criminal justice reforms and fight against corruption and it is being funded by European Union EU.