Home » News » NEWS UPDATE:"I will Bring Back Out of School Students Back to School" - Gov Fintiri.

NEWS UPDATE:"I will Bring Back Out of School Students Back to School" - Gov Fintiri. 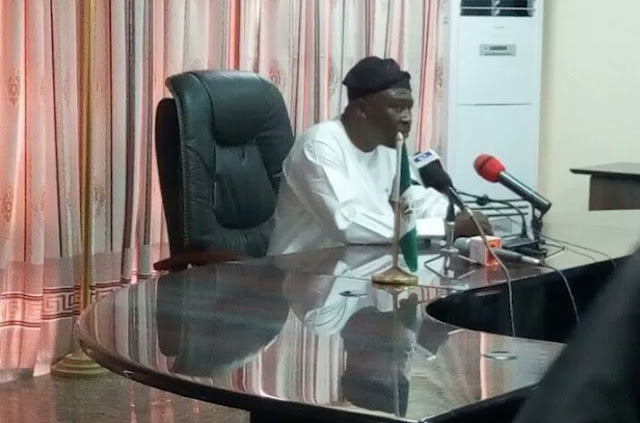 In continuation with the Ministerial briefing to Governor Ahmadu Umaru Fintiri of Adamawa State, in Government House Yola, the Governor has emphasised that his administration will bring back out of school children in the State to be part of beneficiaries of the education programme his Government is set to put in place.

This became necessary as an alarming number of out of school children in the Northern Nigeria was alerted by UNICEF recently which includes Adamawa State.


Governor Fintiri while receiving a brief from Ministry of Higher Education Science and
Technology and Ministry of Education, said that much will be invested in education in his administration. Already, Governor Fintiri stressed, 6 Senior Secondary Schools and 3 Junior Secondary Schools in the State have started benefitting from free feeding programme.

By the Month of September 2019, when schools will resume for a new session, free and compulsory education will be implemented in all schools in Adamawa State and the over 50 boarding schools in the State will be part of the ongoing free feeding programme in the State.

Earlier on Monday, the Governor has gave directives to Ministry of Land and Survey to revoke lands illegally acquired by individuals in the State for the benefit of the people of Adamawa. Such lands include school lands and refuse dump site.

The Governor further directed that all Ministries should henceforth print official documents at the Government Printers for secrecy and to generate revenue for the State.

In todays briefing, the ATM Governor reassured good people of Adamawa State that other properties owned by the State which were illegally taken away, will be  retrieved and Ministries who are the custodian of such properties should take charge of it.
Meanwhile, Governor Fintiri expatiate on the order he gave Local Government Councils of Adamawa State to expunge ghost workers.

The Governor emphasised that only ghost workers will be affected and those who were legally employed should not be panic because his administration will not victimize any legally employed staff. His administration is making effort to correct abnormalities and encourage due processes in all facet of governance.
06:54
Adamawa Daily Reports
News
Email ThisBlogThis!Share to TwitterShare to Facebook