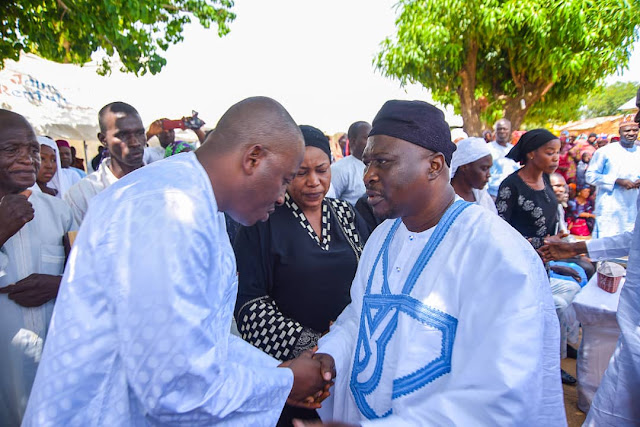 His Excellency, Ahmadu Umaru Fintiri has condoled the family of late Bulama Dauda Yampa in Michika and described the decease as a man with reputable character.

The Governor who was accompanied by the Secretary to the State Government, Bashir Ahmed and other politicians in the state, said death is inevitable; it comes from God. Stressing that late Baba Bulama left behind a legacy worthy emulating and pray that God Almighty will grant the family the fortitude to bear the irreparable lost.


The death of late Bulama, Governor Fintiri said is a lesson to all to come closer to the creator.
Governor Fintiri who reassure the people of Michika the safety of their lives and properties, stressed that his administration will deal with perpetrators of crime in the state and he will ensure the improvement on the health facilities on ground to safe the lives of the citizens.

Earlier in their separate condolence massages, the Member representing Michika in Adamawa State House of Assembly, Hon. Joseph Ayuba Kwada and the Chairman, Peoples Democratic Party (PDP) Michika Local Government Area, Hon. Ezekiel Kwaji described late Baba Bulala as man of integrity who has instilled discipline not only to his children but to those who come close to him and thanked His Excellency Governor Fintiri, his entourage and people of Michika for their condolences.

The two PDP statesmen prayed that late Baba Bulama Dauda will rest in perpetuity at the bosom of the creator.

In his exegesis, the Pastor in charge of COCIN Rafin Tsanyi Michika, recalled that man is usually faced with three things in life: birth, marriage and death and enjoined all believers to always be steadfast in their faith.


The decease left behind 13 children among them is the Member representing Michika and Madagali Constituency at the State House of Representatives, 30 Grand-Children and 1 Great-grand child.
The retired Local Government staff has been buried in his hometown, Michika according to Christian  rites on 25th June, 2019.
12:02
Adamawa Daily Reports
News
Email ThisBlogThis!Share to TwitterShare to Facebook