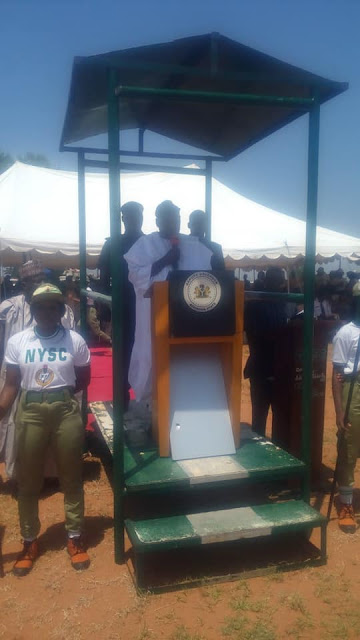 Adamawa State Governor, Ahmadu Umaru Fintiri has informed that his administration will continue to fight any form of crime and threats on the life of every one in the State. The Governor said he will maintain the vigour in sustaining the security fight until terrorism, kidnapping and killings happening in and around the State is wiped out completely

Governor Fintiri who was represented by the Deputy Governor, Chief Crowther Seth made the remark at the Opening Ceremony of the 2019 Batch 'B' Orientation Course, held at the Permanent Orientation Camp, Damare, Girei LGA. He saluted the courage summoned by the corps members deployed to Adamawa State at this critical moment .


The Governor observed that the act of loyalty shown by corps Members is a practical demonstration of love shown for the continued existence of the nation as a united entity.
Deputy Governor Crowther Seth appreciated the corps members who he said traveled out of their comfort zone for the national assignment.

He emphasized that Adamawa is one among the peaceful States in the country and posited that remarkable progress has been achieved in tackling insecurity due to the concerted efforts of all security agencies and the cooperation of the entire citizenry.


He assured corps members also that Adamawa State is one the best place for them to serve profitably.
The Deputy Governor who urged Corps members to start seeing themselves as future leaders also prevailed on them to consider themselves privileged to be among the members of the NYSC Scheme.
Corps members were also advised to use the opportunity opportunity to know more about the history, geography and culture of the different people in the country.

The Deputy Governor further donated five Cows and Ten Bags of Rice to the youth's corps members.
He thereafter inspected the camp Clinic, Kitchen and also facilitated the planting of Trees on the Orientation Camp.

Earlier, the State Coordinator NYSC Adamawa State Mallam Ibrahim Muhammad Tukur appealed to the State Government to be benevolent in intervening in one of the critical area of concern such as construction of concrete perimeter fence for the NYSC permanent orientation camp , this he said will further improve security situation on the camp.

The construction of four thousand (4000) seating capacity multipurpose hall at the orientation camp,construction and (tarring) of access road and the procurement of a 36- seater bus were also among help solicited by camp coordinator.
12:47
adamawadailyreport@gmail.com
News
Email ThisBlogThis!Share to TwitterShare to Facebook