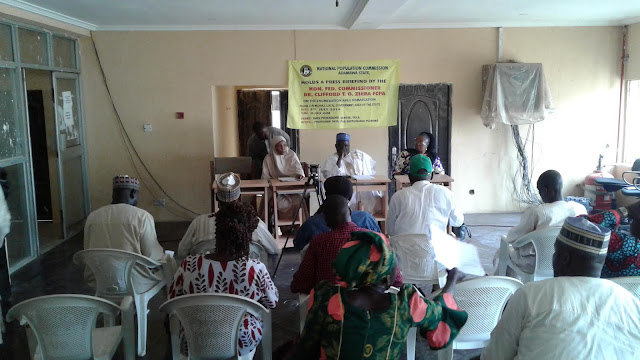 The  National  Population  Commission  has began the Enumeration Area  Demarcation In Adamawa State.
This was disclosed by the  Federal  Commissioner of the  National  Population Dr. Clifford  T O  Zirra  while briefing Journalists during a Press Conference at the Yola office of the  Commission  recently.
The  Federal  Commissioner of the  N P C  stated that the Enumeration Area  Demarcation  is one of the core preparatory  activities for the  Census exercise that constitutes  the foundation on which the entire  Census  architecture  stands.

He explained that the commission  have  resolved to get it right in the quest  to  deliver to the nation an  Accurate, Reliable, Acceptable and Verifiable  Census  for the Country, pointing out that the  N P C is leaving  no stone unturned in order to  ensure that  the  Enumeration Area Demarcation is carried out meticulously, professionally and scientifically in order to provide the basis for the smooth conduct of the next Census in the  Country.
Dr. Clifford T O Zirra  also  called on all critical  stakeholders to support the  commission for the  realization of the conduct of the next census exercise, and  solicited for the  assistance of the  Local Government Councils and the  Traditional Institutions in the provision of guides and accommodation for the field  staff, stressing that the  Commission has put in place adequate logistics  arrangement  for effective deployment of personnel and  materials in the selected Local Government Areas.

He  also  solicited for the support of the state  Government  and the  security agencies for the smooth conduct of the  exercise scheduled to take place in Michika local government  area, explaining that already the  commission has conducted  a successful  exercise  in Yola  North,  Girei, Numan  and Mayo Belwa Local Government Areas.

The  Commissioner of the N P C  also  explained that the  Enumeration Area Demarcation  exercise  is not the Enumeration of persons   living in the  Country and it's outcomes will not in any way determine the population  of any Community, Local Government or State, maintaining that the  exercise is just the division of the  country  into  small Geographical areas to facilitate  Enumeration.

He  however  appealed to the  State and Local Government  Councils, Traditional  Institutions and Communities in the affected areas to support the  Commission  in carrying out the Enumeration Area Demarcation by allowing  demarcators unfettered access to facilities and places in the  areas to be demarcated.