The Chairperson of Adamawa State Sexual Assault Referral Center (Hope Center) Barrister Fatima Abbo Jimeta stated this today during a sensitization visit at GDSS Doubeli (Yola North) in the company of the State Steering Committee on Gender Based Violence GBV which was organized by the State Government in Partnership with USAID, Pathfinder and Evidence to Action.

She said the State Government in collaboration with other NGOs has established a Center within the Specialist Hospital here in Yola called Adamawa Hope Center. And, that the Center only caters for people who have been sexually violated. “These people receive free medical services and free counseling”,adding that the  State Government has taken the campaign on Gender Based Violence to various public schools across the State and urged the student to take advantage of the opportunity and learn from it.

The Steering Committee which constitute of Persons from the Nigeria Police, Civil Defense, Ministry of Justice, Ministry of Women Affair, FOMWAN, CAN,FIDA, Ministry of Health, Ministry of Information among others  spoke with relevance to his/her profession.

The official phone number of the Adamawa Hope Center was given to the students while Polo Shirts, Note books, fliers and posters carrying the message of GBV  was presented to one of the  Principals.

However, the Principals of Junior and Senior Students commended the effort of the committee  saying that before now , they have nowhere to report such cases to but now, they have the Hope Center.

Similarly, the Committee extended the campaign to Hammawa JSS/SSS in Yola South in the afternoon where the same issues were raised.

The School Principals were very delighted that their school was among the selected schools while the student cooperated with the Committee.
Other Local Government Areas to benefit from the exercise include; Numan, Demsa, Girei, Mubi North/South, Maiha, Guyuk and Fufore. 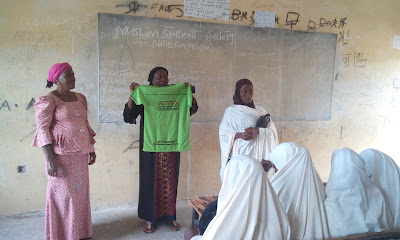 The Hope Center has recorded 143 Sexual Assault Cases from the year it was established in 2018 to date, and survivors have received all the necessary attention required.
13:46
adamawadailyreport@gmail.com
News
Email ThisBlogThis!Share to TwitterShare to Facebook