Governor Ahmadu Umaru Fintiri of Adamawa State told the State this development during a presentation by Remita System Specs Limited, at the Council Chamber in Government House Yola.
The Governor described the TSA as best system for a government to adopt so as to help it check remittance, withdrawal and other transactions made by Ministries, schools, Boards and Parastatals. This if adopted, the Governor said it will work better for the state.

While presenting to top Government officials how TSA operates and its benefits, the representative of Remita System Specs Limited, Mr. Iliya Musa said that technically his company started the TSA in January 2012 but it started operating fully in September 2015.

In his power point presentation, Mr. Musa said that the Treasury Single Account is a “unified structure of government bank accounts that gives a consolidated view of cash position result in overall effective cash management. Adding that TSA could be operated either as a single account, or a series of linked account”.

Each Ministry may have its own bank account, or it may be operated and managed centrally by the State’s Treasury. Depending on the State’s preference, the State Treasury and its MDAs can make payments from, and receive monies into designated accounts in one or multiple bank accounts, Mr. Musa explained. 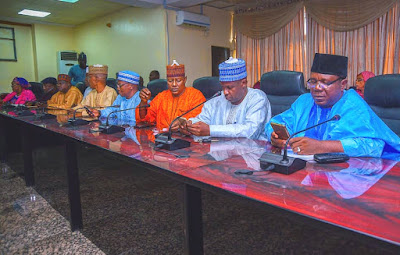 While the benefits Adamawa State will derive from the TSA Mr. Musa said will include: full oversight of all revenue collection, improve revenue flow, multiple collection on one platform and detailed consolidation information of payment received among others.
14:17
Adamawa Daily Reports
News
Email ThisBlogThis!Share to TwitterShare to Facebook