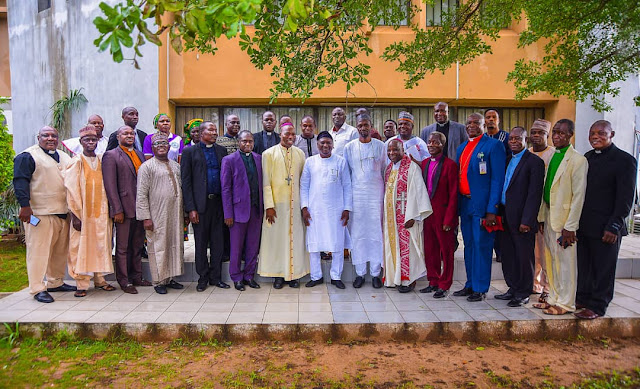 The leadership and members of Christian Association of Nigeria (CAN) Adamawa State Chapter were at the Government House Yola today for a congratulatory visit on Governor Ahmadu Umaru Fintiri over his election as Governor of Adamawa State during the 2019 polls.

The delegation which was led by the Chairman of the CAN, Bishop Stephen Dami Mamza said they were at the Government House to congratulate the Governor for both his election and swearing-in on 29th May, 2019.

Bishop Mamza lamented that the massive votes Governor AUF got from Adamawa electorates was an indication that he had wide acceptance in the State. CAN assured the Governor their readiness to collaborate with the Government of the day in all facet of good governance and called on him to be sensitive to issue of justice and fairness in his administration.

The Christian body applauded Governor AUF quick intervention to issues that bedevilled Adamawa State such security of lives and properties of the people, payment of salaries and overhauling education sector. Adding that Governor AUF achievements underscore his tract records.

While responding, Governor Ahmadu Umaru Fintiri thanked the CAN for their prayers and unflinching support  during and after the 2019 polls and called on them to sustain their prayers for the Government and people of the State.

He assured them fair and just governance throughout his tenure in office.
Outlining the successes recorded by his administration within 30 days in office, Governor AUF said that he has paid two months outstanding salaries of the State Civil Servants, curtailed the activities of Shilla Boys, starts pilot scheme of free feeding to 6 Senior and 3 Junior Secondary Schools and gives complete autonomy to Local Government Areas.

Reiterating that by September when the school resumes for new session, free and compulsory education will be implemented throughout the State. And, a close-door security meeting will hold today- third of its kind since the inauguration of the present administration- to harmonize the security architecture so as to check the excesses of kidnappers, Shilla Boys and other criminal activities in the State.

To actualize the complete autonomy of the LGAs, when the Transition Committee is inaugurated, in 90 days there will be LGAs election in Adamawa State, Governor AUF emphasised.

With sympathy, the Governor announced that the State has received directives from the office of the Security Adviser to President Muhammadu Buhari not to import NPK and Urea fertilizer, citing the band on security reasons which affected the States of Bauchi, Adamawa, Yobe and Borno.

Governor Fintiri called on the people of the State to be patient with the band on importation of the agricultural chemical and obey the directive of the Federal Government. Adding that any person who violated the order will be treated under terrorism law.

He however assured the people of Adamawa State that his administration will look for an alternative to bring succour to the farmers.
06:04
Adamawa Daily Reports
News
Email ThisBlogThis!Share to TwitterShare to Facebook