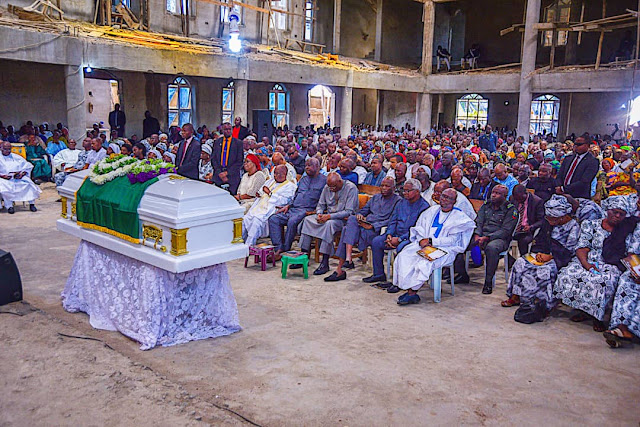 Governor Ahmadu Umaru Fintiri described late Hon. Haske Francis Hannaniya a man with a character worthy emulating because of the transparent life he exhibited when he was alive.
The Governor who was at the burial service of late Hon. Haske at the Lutheran Church of Christ in Nigeria No.1 Hong said he was at the burial service to condole the family and to celebrate the life of the decease on behalf of himself and the Government of Adamawa State.

Governor AUF prayed that God should give the bereaved family the fortitude to bear the irreparable lost.

At the Church Service, the officiating Minister, Rev. Mrs. Jessica Benjamin who read from the book of Second Samuel chapter 12 verses 26 to 23 citing the good virtue of King David, charged Christians to prepare all the time for no one knows when he will die and they should learn to forgive each other.

In a vote of thanks on behalf of the family, Major General Haldu Anthony Hannaniya (Rtd.)thanked the President of Federal Republic of Nigeria, Muhammadu Buhari for sending a delegate to represent him, the Secretary to the Government of the Federation Barr. Boss Mustapha, Governor Ahmadu Umaru Fintiri, Deputy Governor Chief Crowther Seth, former SGF Babachir Lawan, politicians, businessmen who came across the nation, Bishop Lutheran World Federation Most Rev. Musa Panti Filibus, the good people of Adamawa State and those who support the family financially and otherwise during the period of their trial and pray that God Almighty will bless them in double fold and wish everyone safe journey to his home.

Late Haske Francis Hannaniya was born on 14th July 1955 and died at the age of 64 on 24th June, 2019 after a brief illness in Abuja. He was a businessman and a politician who represented Hong/Gombi Federal Constituency in the Federal House of Representatives from 2011 to 2015.
He left behind his wife Barr. Mrs. Afiniki Francis Hannaniya, 5 children, 3 grand children, 8 brothers and sisters among them is Major General Haldu Anthony Hannaniya (Rtd).

There will be 3 days prayers at 6am at his family house on Sunday 5th July and later at 8am, thanksgiving Service at LCCN No.1 Hong.

Late Hon. Haske Haldu Hannaniya has been buried in his home town Hong according to Christian injunction on 6th July, 2019.
09:54
Adamawa Daily Reports
News
Email ThisBlogThis!Share to TwitterShare to Facebook