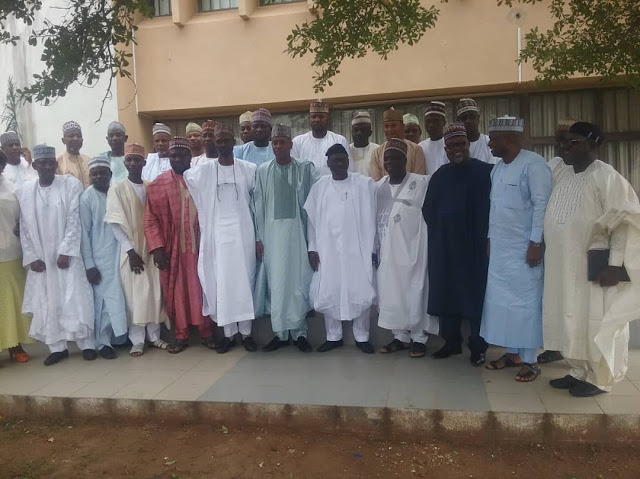 Governor Ahmadu Umaru Fintiri has said his administration will support the North East Commodity Association (NECAS) to sustain its programmes which are meant to boost Agricultural production in the State.


Receiving the Association at the Council Chamber in Government House Yola, Governor AUF said his administration is ready to partner with NECAS to make sure that the farmers in the state are uplifted. Describing the programme as a catalyst which the state will key into so as to turn it to a production state.


Governor Fintiri therefore urged the Association to be free and just to its Members and other beneficiary farmers so that they will have sense of belonging and benefited from all that is meant for them.


Earlier on, the Chairman of NECAS Alh. Sadiq Daware who Is also the leader of the delegation told the gathering that they were at Government House Yola to congratulates Governor AUF over his election and swearing-in as  Governor of Adamawa State.


Highlighting some of the activities of NECAS, Alh. Daware said that the Association was created two years ago to support farmers in the North East region of the country having farming is the major occupation of the people.


Adding that NECAS was accredited by the Central Bank of Nigeria and it has keyed into the Federal Government Anchor Borrowers programme in which it was able to secure and deployed input and services worth about N9b to its farmers.


The Chairman solicited for Adamawa State Government to partner with NECAS so as to sustain its programme. Maintaining that it has secured 600 tractors to its farmers in the North East and Adamawa farmers have been allocated 150 which will be distributed tomorrow Saturday during the flag-off of the North East distribution at its headquarters in Yola, Adamawa State capital.


The Chairman also said, NECAS is creating more jobs for youths and women in its programme as its mechanization unit will soon be operational across the state which will be headed by managers and will have some technical officers who will assist in not only maintaining the farm machineries but also train the youths on handling them.


They also called on the Government of the State to solicit on behalf of the farmers in the State to the office of the National Security Adviser to review the ban on the use, importation and distribution of chemical fertilizers which they said will affect the output of agricultural produce in the zone.


It could be recalled that the office of the National Security Adviser over the week has banned the use of chemical fertilizers in the States of Yobe, Borno, Gombe and Adamawa given reason to security, that terrorists operating in the North East are using it to manufacture weapons of mass destruction.
In attendance at the courtesy call are the SSG Ahmed Bashir, Chief of Staff Government House Yola.