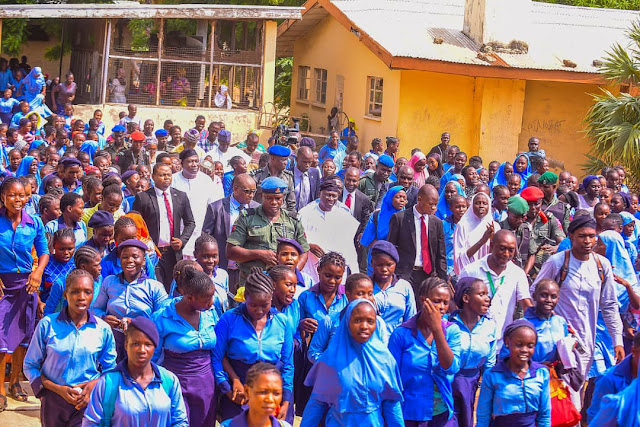 .
The Governor who was in company of the Secretary to the State Government, Alh. Bashir Ahmed and Chief of Staff Government House Yola, Prof. Maxwell Gidado SAN said that they were in the school to inspect the ongoing pilot free feeding programme, how the students were fed and their welfare.

While going round the school to inspect the launch prepared for the students, the Governor who prioritize education in his administration, said his government will make sure that the students’ feeding and welfare are properly taking care of; mosquito nets and other necessities to make their learning environment conducive will be made available.

Maintaining that the feeding programmme which was a pilot one in the state, will be improved upon and extended to all the boarding schools in state. 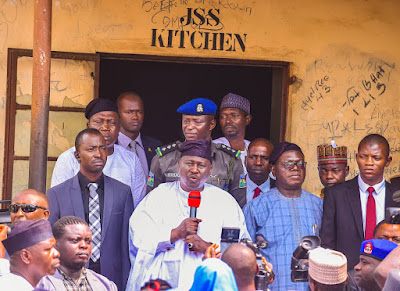 Governor AUF who was dismay with the selling of some plot of land especially those owned by the school, said all the lands have been revoked and soon structures erected on them will be demolished.
The Governor who was cheered by the students in different thank you and morale boosting songs, advised the students to be law abiding and take their studies serious for they are the leaders of tomorrow.

While leading Governor AUF and some Government officials to the kitchen of the school, the Principal Government Girls Secondary School Junior Section Yola, Mrs Margret James explained that the feeding programme in the school is recording success.

The Principal thanked Governor Fintiri for his quick intervention in the feeding of the students adding that the programme is unmatched.
09:46
Adamawa Daily Reports
News
Email ThisBlogThis!Share to TwitterShare to Facebook