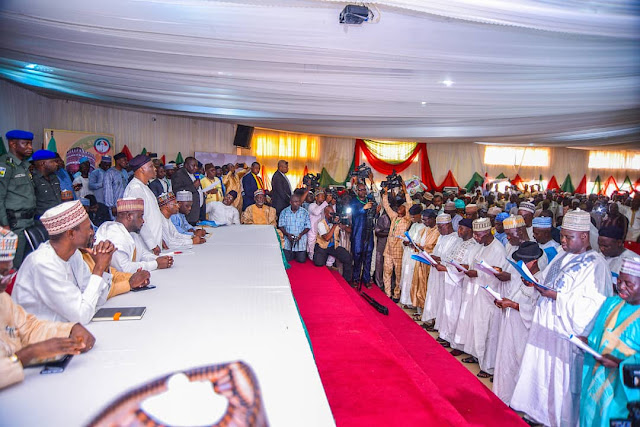 Admonishing the LGAs Chairmen, the Governor charged them to discharge their responsibilities with all sense of humility, replicate the good policies of his administration and do justice to all. The ATM Governor maintained that the Chairmen should ensure that their daily activities are centred around the common man and masses of the State. Adding that a guide line for running their administration will soon be approved by the Adamawa State House of Assembly; and as soon as it is send to them, they should follow what is obtain in the guideline diligently.

Governor Fintiri who defeated APC incumbent Governor Mohammadu Umaru Jibrilla Bindow during the 2019 polls, said that he has given complete autonomy to LGAs in Adamawa State two days after his swearing-in stressing that this is the new atmosphere in which the Chairmen will cooperate.

On his part, the Adamawa State Chairman of Peoples Democratic Party, Barr. A. T. Shehu thanked Governor AUF for fulfilling his campaign promise and that of the party to bring good governance to grassroot by swearing-in the LGA Transition Committees.

The oath of office and secrecy was administered by Barr. Yusuf Manasseh Daniel.
In a vote of thanks on behalf of the sworn-in Chairmen, the Chairman Yola North Local Government, Adamu Ibrahim Wakili thanked Governor AUF for finding them worthy to contribute their quota to bring development at the grassroot. He pray that they will work towards the betterment of their people.

Those sworn-in as care  taker transition committee Chairmen for the 21 LGAs  are: