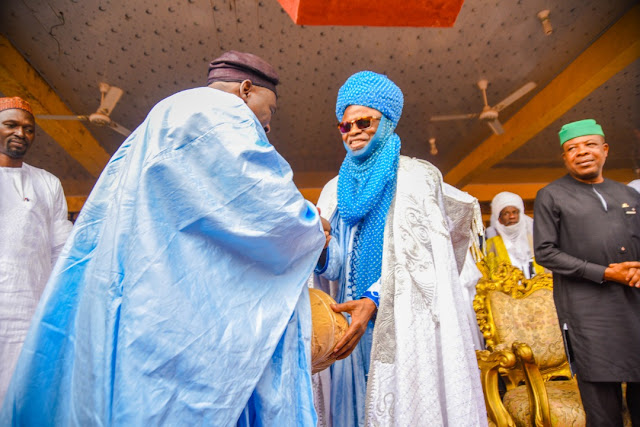 The two raka’at prayer was led by the Chief Imam of the Modibbo Adama Central Mosque, Khadi Ahmadu Bobboi who shortly after the prayer embarked on sermon. 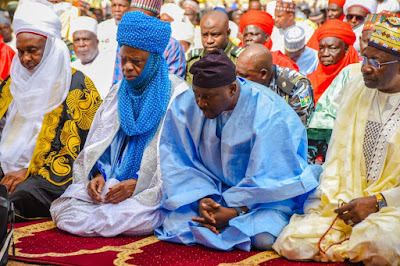 The Chief Imam admonished Muslim faithful to emulate Prophet Muhammed and Ismail who offered his son for sacrifice before Angel Gabriel provided an alternative ram for the sacrifice.

The Khadi explained that a sacrificial ram is expected to be divided into three by any one who is capable of doing the sacrifice. One of it will be for the family, the other will be shared as charity to friends or neighbours and the last for sadakat. Khadi Ahmadu Booboi thereafter performed a symbolic sacrifice of his ram with encouragement on Muslim faithful who can afford buying animals for sacrifice to emulate.

Governor Fintiri presented to the Royal Father a Sallah gift with his counterpart from Imo State, Chief Emeka Ihedioha who was in Adamawa State for a condolence visit on Governor Ahmadu Umaru Fintiri over the death of father and Sallah celebration.

The Governor equally received Sallah homage from other arms of Government and groups at Government House Yola to include the Judiciary led by the State Chief Judge Justice Ishaya Kida Banu, the Legislative led by the Deputy Speaker, the appointed political office holders led by the State Attorney General Barr. Afraimu K. Jingi and Head of Service speaks on behalf of the State Civil Servants in the State.

Responding to the groups in their separate Sallah homage, Governor Ahmadu Umaru Fintiri thanked them for the homage and wish all Muslim faithful in  Adamawa State happy Eid-El Sallah celebration and enjoined the good people of the state to learn to coexist so as to bring development in the State.

Highlight of the homage was presentation of Sallah gift to Governor Ahmadu Umaru Fintiri.