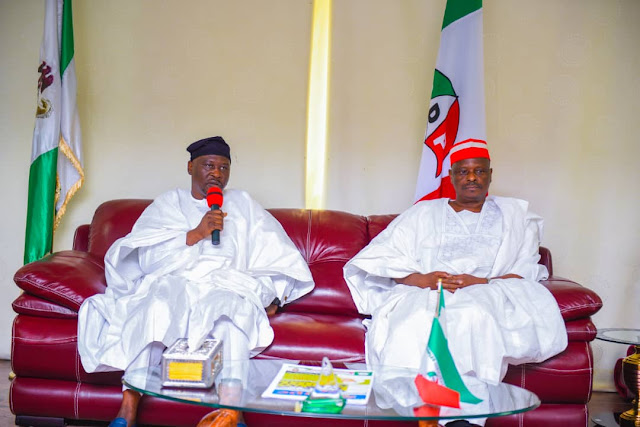 Governor Ahmadu Umaru Fintiri has granted audience to former Kano State Governor, Senator Rabiu Musa Kwankwaso and three Adamawa State Senators representing North, South and Central zones in a separate condolence on him over the death of his father.

Sen. Kwankwaso who was accompanied by some Kano State Peoples Democratic Party stakeholders were received by Governor Fintiri in his office in Government House Yola.

The former Kano State Governor said they were at Government House Yola to commiserate with Governor Fintiri and good people of Adamawa State over the death of his father, late Alhaji Umaru Badami. Sen. Kwankwaso prayed to God to grant Governor Fintiri and the people of the State the heart to bear the great loss while describing death as inevitable act created by God to be tested by all mortals.

The Kano PDP delegation used the medium to congratulate Governor Ahmadu Umaru Fintiri over his victory during 2019 General Elections and his swearing-in as Executive Governor of Adamawa State.
Similarly, Senator Aisha Dahiru Binani of the Adamawa Central Senatorial Zone who spoke on behave of Senator Binos Yaroe of the South and Senator Ishaku Abbo of the North, said they were at the Government House Yola on behalf of their Constituencies to commiserate with Governor Fintiri over the death of his father. 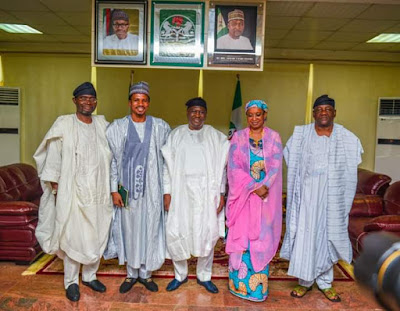 The Senators prayed that God will grant the soul of the decease everlasting Kingdom.
In a separate interview with Senator Binos Yaroe and Senator Ishaku Abbo they affirmed that the three Senators of Adamawa State in the   Red Chamber are working harmoniously to bring development to the State.

Similarly, Pene da Bwatiye World Wide, a Bwatiye Socio Cultural groip led by its President, Mr. Hezron Fada paid a similar visit on Governor Ahmadu Umaru Fintiri at the Conference Hall, Government House Yola, the Hoba community from Hong Local Government Area were also on the same visit and they were granted audience by Governor Fintiri at the Banquet Hall in GHY among other numerous groups.

In a separate responses, Governor Ahmadu Umaru Fintiri thanked the sympathizers and the prayers they offered to the repose of his late father, Alhaji Umaru Badami.