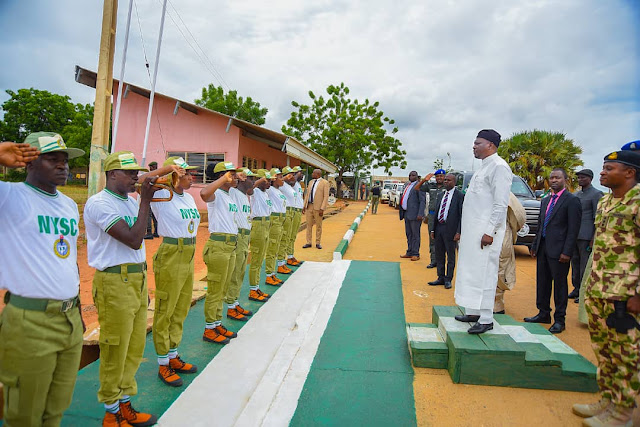 The Governor said this at the Passing Out Parade of 1,205 Corps members of 2019 Batch B Stream 2  posted to Adamawa State held at the NYSC Permanent Orientation Camp in Damare, Girei Local Government Area.
Governor Fintiri noted that within the three weeks orientation camp of the  Corps members, they were inculcated with patriotism and stressed that the state has being benefiting from the scheme in the area of health, education, agriculture among others.

He explained that the security challenges which the state suffered over the years, has been checked to the barest minimum and assured the Corps members posted to the State their safety.
Earlier in his welcoming address, the Adamawa State NYSC Coordinator, Mal. Ibrahim Mohammed Tukur said that the corps members have received three weeks orientation at the Damare camp in the hands of professional trainers.

The Coordinator explained that the call for national service is not mean for all but for those who deserve it. He call on the Corps members to note that where they will be posted for their primary assignment, they will meet people with different culture, linguistic, religion and tradition.
Mal. Tukur therefore enjoined the Corps members to respect the people of their host community and assist NYSC to achieve its goal.

Highlight of the Passing Out Parade was presentation to Governor Ahmadu Umaru Fintiri a plaque and  an enlarged of his group photograph with Corps members, march pass in slow and quick time by the corps members, Marghi cultural dance and Karate self defence display by the Man O’ War Corps members.
09:24
adamawadailyreport@gmail.com
news update
Email ThisBlogThis!Share to TwitterShare to Facebook