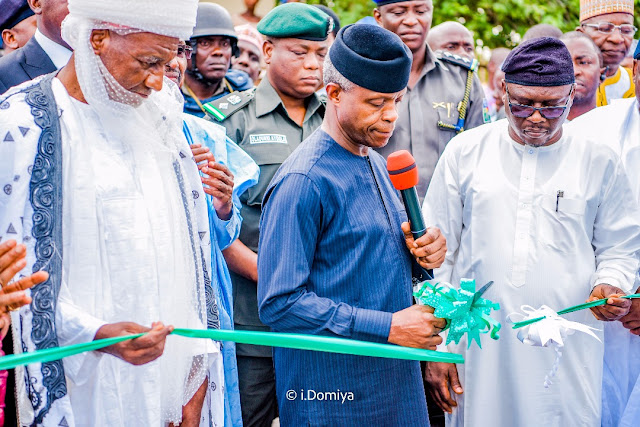 While delivering his speech, Prof. Osinbajo explained some factors that led to the idea of NLTP, in which he said at the height of the farmers/herders crises in some parts of Nigeria, the National Economic Council, NEC composed of all the 36 State Governors of the country meets to look for possible ways to end the crises and ensuring economic growth at the same time.

On that note the VP said, the Government set up a committee comprises of the Governors of Taraba, Adamawa, Plateau, Benue, Kaduna, Nasarawa, Ebonyi, Oyo and Zamfara States to develop a plan that gave birth to NLTP.
Prof. Osinbajo further said that the committee submitted its report to National Economic Council which was endorsed by the council. And, it was agreed that Adamawa, Taraba, Plateau, Zamfara, Kaduna, Nasarawa and Benue will be the pilot states for NLTP project.

The Jagaba Adamawa stated that the programme will be in collaboration with the Federal and State Governments, Farmers, Pastoralists and Private investors. Maintaining that the Federal Government will not take land from any State or Local Governments; any facilitating state will provide the land and its contribution to the project.

The Vice President further explained that the project will provide ranches where cattle are breed and diary and meat are produce using modern livestock method.

The VP said that the NLTP will check the pressure on water and pasture caused by the forces of climate change and provide a modern meet and diary industry and in many cases integrated crop farming along side the ranches and cattle farming. He emphasised that the NLTP can only be implemented with the consent of a State Government and the people of the State.

While applauding Governor Ahmadu Umaru Fintiri of Adamawa State for consulting the NEC on assumption of office to know the NLTP project and how it will be implemented in the State, Prof. Osinbajo said that the project will provide job, basis for coexistence among diverse people of the state and mechanism for solution of farmers-herders crisis.

On his part, the Governor of Adamawa State, Rt. Hon. Ahmadu UmarunFintiri said that the state key into the NLTP because of the benefit which it will derive from. This include home ground strategy with the main aim of modernizing livestock production, economic growth and development, peaceful coexistence, security among farmers and herders, wealth creation and functionality.

Noting that the diversification of the country’s economy with livestock has the hope.
The Governor said that the NLTP hint on the co-pillar of market driven livestock ranches, breed and genetic, efficient land and water utilization.

Having understand these benefits, Governor Fintiri said his administration, one month on assumption in to office constituted and inaugurated a six-man State Livestock Transformation Officen headed by Professor of Animal Husbandry, Alikidon Ambrose Voh,  because it believes the NLTP is the solution to farmers-herders crisis which Adamawa has been a victim.

He stressed that the National Livestock Transformation Plan has nothing to do with the controversial RUGA settlement initiated by the Federal Ministry of Agriculture. He therefore urged the people of Adamawa State to embrace the NLTP for it is hope that it will bring peace among the diverse people of the state which it was known with.

Earlier in his welcoming address, the Adamawa State Livestock Transformation Office Chairman, Prof. Alikidon Ambrose Voh said that Nigeria has 415 grazing reserves and Adamawa State has the highest, with 69. He explained that 31 have already been fully gazetted and will be part of the NLTP project while 38 are non gazetted.
Prof. Voh further explained that the NLTP will span the period 2019 to 2028, adding that the total land that are available for the project are attributable to 5 selected gazetted grazing reserve of  Nasarawo-Jada in Jada LGA, Dabchi in Song LGA, Guyaku in Gombi LGA, Sorau in Maiha LGA and Gongoshi in Mayo Belwa LGA. He stated that Gongoshi where the project was flagged off has 9,500 hectres and the land sizes put together for the NLTP project as approved by Adamawa State Government is 60,000.

Prof. Voh revealed that in Gongoshi Grazing Reserve, his committee enumerated 772 livestock household and 190 crop farmers household. Adding that out of the ten breed of cattle endowed with in Nigeria, Gongishi Grazing Reserve has four. This include Adamawa Budali which cannot be found anywhere outside Adamawa State, Sokoto budali, rahaji and bunaji.

The breed of sheep found are yankasa, buda and balami while that of goat are the Sokoto red and the sahedian.
13:22
adamawadailyreport@gmail.com
News
Email ThisBlogThis!Share to TwitterShare to Facebook