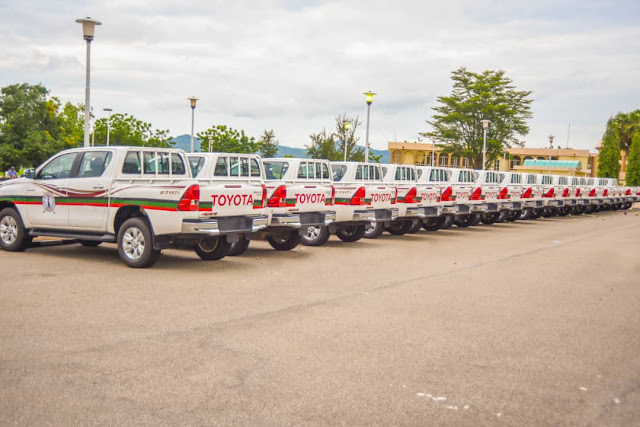 Prof. Osinbajo who earlier flagged-off the National Livestock Transformation Plan project in Gongoshi, Mayo-Belwa, while in Government House Yola- the venue of the launching of the security operational vehicles-lauded the effort of Rt. Hon. Ahmadu Umaru Fintiri led administration in fighting crime in Adamawa State which he said will lead to the growth and development of the State.

Governor Ahmadu Umaru Fintiri said that his administration procured 60 Toyota Hilux van and 50 motor cycles to fight criminality in the State. He reiterated that it is part of his campaign promises to combat all forms of crime and provide security of lives and properties of the good people of the State that he is fulfilling, adding that the vehicles purchased is to complement the effort of the security operatives. 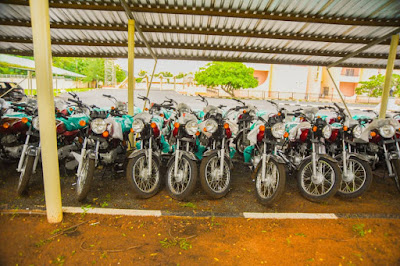 It could be recalled that before the swearing-in of Rt. Hon. Ahmadu Umaru Fintiri as Governor of Adamawa State, the rate of crime in the State was alarming. Kidnapping, armed robbery and all forms of criminality perpetrated by the Shilla Cult group became order of the day.

Adamawa State Governor has in his 11 point agenda prioritize security. Two weeks on assumption in office, he gave the dreaded Shilla Boys cult group two weeks ultimatum to shield their sword, after which he stormed the hide out of the group with service Chiefs in the State in the popular “Mini Sambisa Forest” in Jimeta.

That subsequently led to formation of a joint taskforce of the security operatives in the state, which they  combed the Shilla Boys’ and kidnappers’ hide out in different locations in the State.
The operations led to the arrest of over 250 Shilla Boys and over 60 kidnappers in different locations in the State.
13:31
adamawadailyreport@gmail.com
News
Email ThisBlogThis!Share to TwitterShare to Facebook