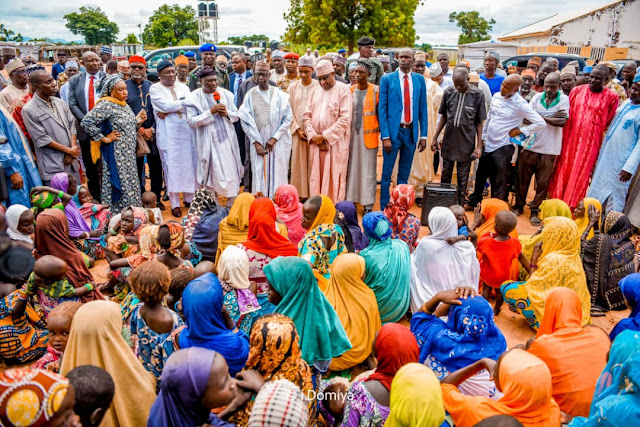 Governor Ahmadu Umaru Fintiri of Adamawa State has applauded the President of the Federal Republic of Nigeria, Muhammadu Buhari for his foresight to establish the North East Development Commission, NEDC and appointed a well deserved leader to pilot the affairs of the Commission while directing the State Ministry of Finance to start monthly deduction for its funding.

The Governor stated this while receiving the NEDC high power delegation on a courtesy visit in the Council Chamber of the State Government House, Yola.

While welcoming the Commission Members to Adamawa State, as a Government, Governor Fintiri said it will immediately provide operational office for NEDC in the State Capital Yola and all other things that will make the Commission function effectively to serve the people of the State. He  explained that a lot of palliatives have been deployed to the Local Government Areas of Gombi, Hong, Maiha, Mubi North, Mubi South, Michika and Madagali, ravaged by the Boko Haram attacks but are not enough.

Noting that the influx of people from the front line areas and neighbouring States of Borno and Yobe, has created social problem to the cities in the state. Governor Fintiri express optimism that the NEDC will soon address this problem.

For effective operation of the NEDC in the State, Governor Fintiri directs the deduction for its funding;

“For the Commission to meets with its mandate to build infrastructure, I call on the Ministry of Finance to immediately start deduction and funding of the Commission from the three percent (3%) gross collection from the Value Added Tax as enshrined in the Act establishing the Commission”, Governor Fintiri said.
Earlier in his address, the Chairman North-East Development Commission, Major General Paul Tarfa, Rtd said they were in Adamawa State for a familiarization tour.

Major General Tarfa, Rtd explained that the Commission mandate include: receiving and monitoring fund allocated by the Federal Government, States affected by insurgency and International donors for resettlement, rehabilitation, reintegration and construction of roads, houses, bridges as well as tackling the menace of poverty, illiteracy, ecological problems among others.

The Commission Chairman noted that within 10 years activities of Boko Haram insurgents in the North East, it has led to the death of over 20,000 people and over 2 million were displaced from the original communities.
Stressing that Boko Haram insurgence has been described as a worst humanitarian crises while lamenting the destructive effect of the insurgents that caused overstretching schools, hospitals, markets as well as the host communities where the IDPs are domiciling.

Shortly after the courtesy visit, Governor Ahmadu Umaru Fintiri in company of top Government Officials in the State took round NEDC officials to two of the major  IDPs Camps in the State.

At Malkohi IDP Camp, the Executive Secretary, Adamawa State Emergency Management Agency, Alh. Aminu Mohammed Suleiman explained that hitherto the camp has over 7,000 individuals but presently it has 1,123. At Fufore IDP Camp he said that the Camp was a transit one which accommodate refugees on transit from the Republic of Cameroon. The later Camp, the Executive Secretary said that before, it has over 10,000 IDPs but presently it has 1,756.

Alh. Suleiman stated that the problems facing the two camps are that of feeding, infrastructure among others. And, about ninety eight percent of the IDPs are indigenes of Borno and Yobe States.
On his part the Chairman NEDC, Major General Paul Tarfa assured the IDPs that the commission will soon provide the IDPs with items that will ease their suffering.

Moved by the state of the IDPs, Governor Ahmadu Umaru Fintiri assured that the State Government will cooperate with the NEDC to build communities destroyed by the insurgent, provide the needful at the camp while urging the IDPs to obey the rules and order in the Camp.
12:38
adamawadailyreport@gmail.com
News
Email ThisBlogThis!Share to TwitterShare to Facebook