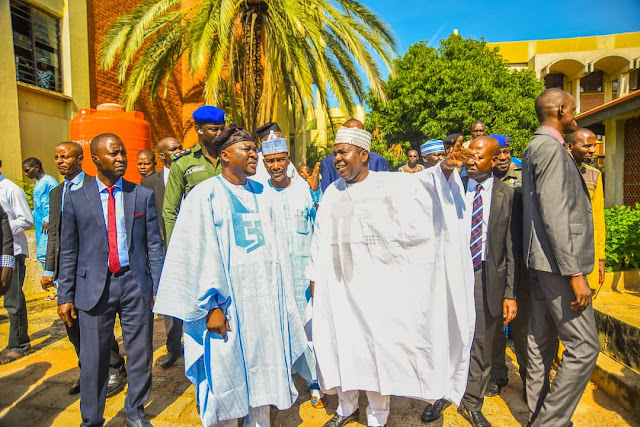 Governor Ahmadu Umaru Fintiri has reiterated his administration commitment to welfare of Civil Servants in Adamawa State with improve condition of service.
The Governor who was in a meeting with the Head of Service and the Permanent Secretaries at the Admiral Nyako Training Centre in State Secretariat Complex Yola noted that the ministerial briefing he had with the Permanent Secretaries shortly after his swearing-in as Governor, has started building trust in them.

He called on the Permanent Secretaries to work for the interest of Adamawa people. This he said has guided the day-to-day assignment and relationship with his administration.
Governor Fintiri explained that the committees his administration inaugurated for Civil Service Reform is not a panel for witch-hunting any body.

“Like any other committee that we have formed, they are not panels for witch-hunting anybody but they are committees formed to use their vast experience, to study the present atmosphere so that they will improve the productivity of the Civil Servants”, Governor Fintiri said.

He observed that no system will work effectively and efficiently without capacity building which was why he approved and funded capacity building trainings for Civil Servants forwarded to him by the desired ministries. This and many more the Governor assured he will continue to fund within the context of the available resources and make sure that the Civil Servants discharge their duty efficiently and  effectively.

The Governor stressed that his administration will continue to work under cordial relationship with the Civil Servants. Adding that his administration will not make the service dormant but make it work again while encouraging the Permanent Secretaries to be the driven force.The number one citizen of the State express dismay over the non payment of entitlements to Civil Servants after retirement. He assured rewarding hardworking civil servants as he has already started with a civil servant who was victimize. He explained that he did not have the opportunity to reward the civil servant but he has paid all his entitlements.

Governor Fintiri explained that he has started putting the state to economic stability that is why the state can now pay salaries without borrowing.

He further assured the Permanent Secretaries that some of their ministries’ pressing needs will soon be addressed. Maintaining that he will start working with the relevant ministries to build office accommodations in the State Secretariat Complex and procure operational vehicles for their official assignments.

Earlier in his address, the State Head of Service, Dr. Edgar Amos said that the meeting was at his instance, invited Governor Fintiri to brief him on the assignment giving to the committee he inaugurated to evaluate Civil Service Reforms in Adamawa State.

The Head of Service explained that he has enjoined the Committee during briefing in his office to do their assignment diligently because they were constituted to make the Civil Service productive again.
He added that the committee recommendation will aim at enhancing effective service delivery and accountability in the area of deployment, promotion, enhancement of safety, security among others.
Dr. Edgar briefed the Governor that they have complied with his directives to connecting the State Secretariat Complex to National Grid and make water available in the various ministries.
He thanked Governor Ahmadu Umaru Fintiri for keeping to his promises by ensuring prompt payment of Civil Servants salaries on before 23rd of every month.

Governor Ahamadu Umaru Fintiri was thereafter took round the State Secretariat Complex by the Head of Service Dr. Edgar Amos in company of the Permanent Secretaries.
13:41
adamawadailyreport@gmail.com
News
Email ThisBlogThis!Share to TwitterShare to Facebook