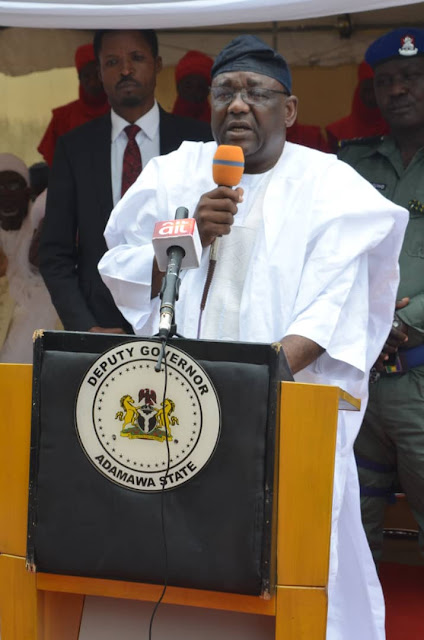 Some Civil Servants employed by the previous administration in the State have stage a peaceful protest over  their six months unpaid salaries by the state Government.

He assured the protesters that Governor Fintiri who is a friend of Civil Servants will resolve the issues as soon as he is back in the state.

Chief Crowther called on them to conduct themselves peacefully as nothing good  can be achieved without peace and further  advised them to be law abiding citizens.

The leader of the protesters while presenting their letter to the State Government said they decided to embarked on peaceful protest after exhausting all relevant avenues.

He said all of them about five thousand in number working in different places across the State have not been paid their salaries from April 2019 to date with no any statement from Government on their plight.

Faisal Baba lamented that most of them are passing through untold hardships as a result of non payment of their salaries despite under going screening organised by State Government.

In addition,  they want Government to come out with a definite position on those employed massively at  the end of the previous administration and also want to know the fate of those transferred as a result of the waivers granted by the Bindow led  APC Government at the tail end of the last administration.

The Chief of Staff, Prof Maxwell Gidado, SAN and the SSG,  Ahmad were part of the Government delegation that received the protesters at the Government House.
14:05
adamawadailyreport@gmail.com
News
Email ThisBlogThis!Share to TwitterShare to Facebook