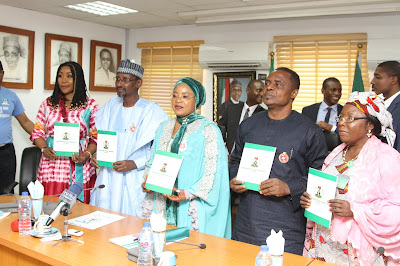 The Honourable Minister of the Federal Capital Territory (FCT), Malam
Muhammad Musa Bello has co-opted the National Agency for the
Prohibition of Trafficking in Persons (NAPTIP) into the FCT Security
Committee in its effort to check human trafficking and allied crimes
in the FCT.

The Minister who carried out this action when the Director General of
NAPTIP, Dame Julie Okah-Donli led a delegation of officials from the
Agency on a courtesy visit to the FCT Administration, said this became
necessary in view of the security challenge trafficking in humans poses
for the FCT.

He stressed that human trafficking involved criminal gangs which go
hand in hand with drug pushers and other such crimes. In his words
“ once you see human traffickers, you see drug pushers and then you
see commercial sex workers, you find out that it’s a clique that is
intertwined and eventually it also transcend into criminality in form of
pick pocketing,one chance and so on. All these are interrelated and
that is why I feel that your organization can be coopted to serve in the
FCT Security Committee”.

While commending NAPTIP for its fight against human trafficking, Malam
Bello assured officials of the Agency that there were many possible
areas of cooperation between FCTA and NAPTIP. He urged the Agency
to work very closely with the Social Development Secretariat of the
FCT under the supervision of the Honorable Minister of State.

On the request by the NAPTIP to revoke the titles of buildings used for
human trafficking, the Minister said “we will revoke titles. As a matter
of fact, we will equally demolish properties because for every property
there is a specific land use and I have checked and there is no place
where it is written that a property should be used for trafficking”.

Also speaking, the FCT Minister of state, Dr. Ramatu Tijjani Aliyu said that
FCTA’s collaboration with NAPTIP will be fundamental in bringing about
the needed sanity to the city and ridding the FCT of traffickers and their
cohorts.

Speaking earlier, the NAPTIP DG called for a stronger partnership with the
FCT Administration to push the campaign against human trafficking to all
nooks and crannies of the FCT. She added that her organization had
recorded tremendous success so far and would need the support of the
FCTA to achieve more.

She said that while the Agency has taken enlightenment campaigns to
schools and communities, a lot more needed to be done if the menace
of human trafficking is to be stamped out.

She also called for the assistance of the FCT Administration in the
enforcement of the VAPP (Violence Against Persons Prohibition)
Act 2015 which she disclosed is domiciled with NAPTIP but applicable
only in the FCT. Other states of the Federation she explained are
enjoined to adopt provisions of the Act, adding that, so far, seven states
have adopted it.

She further urged the FCT Administration to also revoke the Certificates
of Occupancy for buildings used for trafficking in persons, forced
prostitution and other similar crimes.