NEWS;Adamawa Govt to Recruit 2000 Teachers as Committee Faults Recruitment in to Civil Service 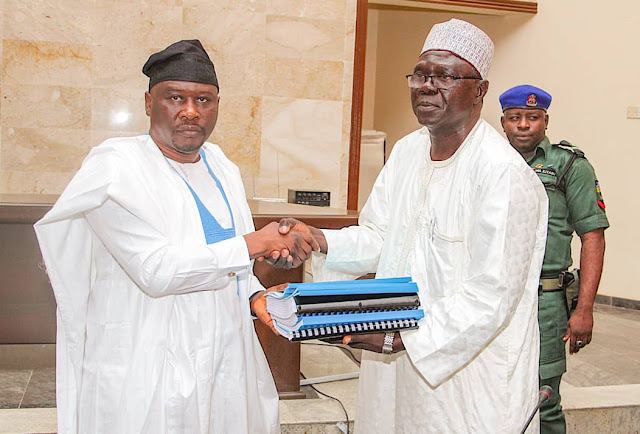 Adamwa State Governor, Ahmadu Umaru Fintiri has said that his administration will recruit two thousand Secondary School Teachers as soon as the 2020 proposed estimated budget is passed into law.

The Governor disclosed this while receiving reports of the Committee for the Regularization of Appointments and Transfer of Service in Adamawa State Civil Service between May 2015 and May 2019, Thursday at the Conference Hall, Government House Yola.

While applauding the committee for carrying out their assignment with all expectations that was expected from it, Governor Fintiri stressed that very soon his administration will form a committee that wil publish a White Paper of the Committee report.

He stated that the Government will review the recommendations of the Committee and decisive action will be taken for the overall interest of the system.

Governor Fintiri explained that his led administration has allocated huge money in the 2020 proposed estimated budget for employment of youths, Graduates and all those that are qualified in the State because the Government will not allow a lot of gap in the system.

"But first we are going to start with our teachers. We will check and see that so long as we continue to give priority to education, we can not achieve what we intended to until we strengthen it with qualified teachers", Governor Fintiri explained.

"Without delay, the Head of Service, as soon as the 2020 Budget is approved,  between the first Quarter of 2020, you commence the recruitment of two thousand Teachers in to our Secondary Schools".

While presenting the report of the Committee for the Regularization of Appointments and Transfer of Service into Admawa State Civil Service, the Chairman, Mr Ibrahim Emmanuel who is also the Permanent Secretary Administration in the office of Head of Service said that the committee was guided by the Civil Service Rules, Laws and Regulations.

He explained that in the course of the exercise, the Committee visited all the MDS and scrutinize documents and waivers that were used to employ the workers in which they discovered seven thousand five hundred and ninety nine Civil Servants were recruited in the period under review.

Highlighting some of the salient points in the Committee report, the Chairman stated that some of the waivers that were approved were either on Curriculum Vitae, Recruitment Forms, NYSC Certificates and applications by Applicants rather than on formal application letters.

The Chairman further revealed that the Committee was able to trace two Third Class officers employed to teach in Institution of higher learning which is contrary to Scheme of Service and some of the approved waivers figures were altered.

He added that there are 4,219 employees who went through due process.This category of recruitment the Committee recommended that they should be sustained.

This category of recruitment the Committee recommended that their recruitment should be reviewed.
03:37
adamawadailyreport@gmail.com
News
Email ThisBlogThis!Share to TwitterShare to Facebook