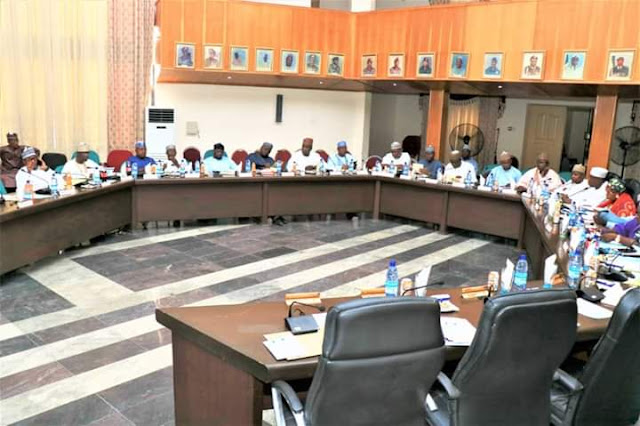 Briefing Newsmen shortly after their second Executive Council meeting since inauguration which was presided by Governor Ahmadu Umaru Fintiri, the Honourable Commissioner Ministry of Information and Strategy, Dr. Umar Garba said that the EXCO has during its sitting at the Conference Hall, Government House Yola, approved the sum of one hundred and seventy two million twenty four thousand seven hundred and fifty naira for the purchase of teaching and learning materials for all the 785 Secondary Schools in the State.

In total Dr. Garba said, for the first three months the Executive Council has approved about three hundred and eight million nine hundred and seventy four million seven hundred and fifty naira.
The Commissioner explained that the approval for the free feeding programme is in line with Governor Ahmadu Umaru Fintiri’s promise to continue with the programme in all public boarding schools in the State beginning from this session.

He added that so far there is achievement in the programme as more parents are enrolling their children into school because of the encouragement they are having in the programme. While for the road construction, the Commissioner for Information and Strategy said that the eight roads to be constructed has the tot5al length of 18.08 kilometre and the roads are in Jimeta.

The Commissioner said that the roads will cost five billion eight hundred  and fifty nine million forty one thousand  seven hundred naira. Adding that the road construction will be awarded to BATCO BMC Africa and very soon the construction firm will mobilise to site.

In a separate remarks, the Commissioner of Tertiary and  Professional Education Alh. Umaru Iya Daware and Commissioner of Commerce and Industry Mrs. Justina Nkom said that all the approvals were done to help in actualizing the 11 point agenda of the present administration in which Education is given top priority, while the road construction will give the State Capital a beautiful look. Gradually they said Governor Ahmadu Umaru Fintiri is fulfilling his campaign promises.
00:43
adamawadailyreport@gmail.com
State Exco
Email ThisBlogThis!Share to TwitterShare to Facebook