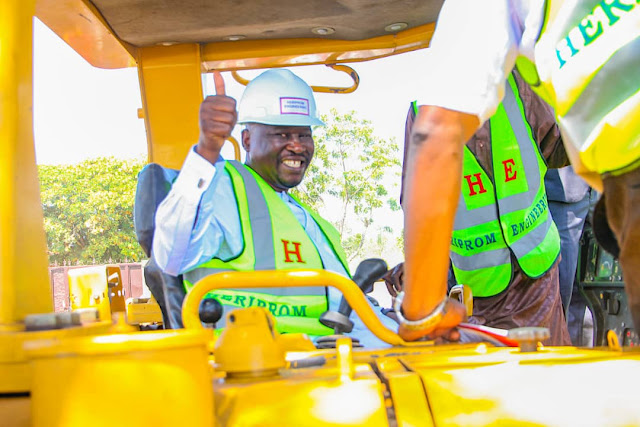 The Adamawa State Governor, Ahmadu Umaru Fintiri has directed the implementation of the national minimum wage agreed between the Federal Government and the Labour Union to State Civil Servants starting from the month of November 2019.

The Governor gave the directive at the flagging off of the construction of 281.7 kilometre Phase II roads and the distribution of maintenance equipment to the Maintenance Team across the state by Rural Access and Mobility Project, RAMP held along Kiri Road in Toungo Local Government Area.

This was in fulfilment of his promise to pay minimum wage to Adamawa State Civil Servants as soon as the National Minimum Wage Committee comes out with final payment formula.

While flagging off the road construction, the Governor said his administration has taken holistic approach to enhance rural transformation in the state and as such constructions of the roads will reduce cost of transportation in rural areas. He added that the roads will promote socioeconomic activities of people as according to him greater number of population is at the rural areas hence improvement of rural communities  remained the primary concern of the present administration.

Gov. AUF stressed that state government under his watch will restore the lost glory of agriculture as an important sector to national development and will continue to maintain the posture so as to improve the livelihood.
Governor Umaru Fintiri further said that his administration will work with all development partners in the state and commended RAMP for its viable projects across Adamawa.

He urged the contractors handling the roads construction to ensure speedy and timely completion of the roads as stipulated in the contractual agreement.

In his remark, the National Coordinator of RAMP Engineer Ubandoma Ularamu represented by Mrs Salamatu Faith Ijibamiya said the roads flagged off will be constructed by RAM under phase two and to be completed by the mid 2020.

Engineer Ularama said the era of construction of hydraulic roads without appropriate maintenance arrangement put in place for sustainability is gone and therefore RAM will also provide maintenance in that regard.
He commended state government under Governor Ahmadu Umaru Fintiri for timely release of counterpart funding for the projects.

Earlier in his welcome address, the State Coordinator of RAM who is the permanent Secretary State Ministry of Infrastructure and Rural Development Architect Aliyu Tarfa called on contractors across the state to emulate from Toungo project which will be completed within six months.

In his goodwill message, the District Head of Toungo Alhaji Muhammadu Jaimu applauded Governor Umaru Fintiri for constructing road and electrification project in the area
10:18
adamawadailyreport@gmail.com
News
Email ThisBlogThis!Share to TwitterShare to Facebook