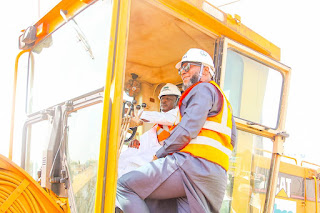 Governor Ahmadu Umaru Fintiri of Adamawa State has flagged off construction of eight point one kilometre roads in the State capital, Jimeta-Yola.

The road construction was flagged off, Wednesday at Bachure, Karewa Ward, one of the Wards to benefit from the project.

The “Fresh Air” Governor, who said the road construction was part of his campaign promises to the people of the State noted that a lot of liabilities on road contract was left by the past administration. Adding that some of the roads were completed while others are on different stages of completion.
He explained that despite the lean resource of the state, his administration completed some of the roads under construction and renegotiate with the contractors to mobilise to site which led to the completion of Ganye township road in Ganye Local Government Area.

The ATM Governor list the roads that are going to be constructed and rehabilitated to include: Philip Maken, Lagos, Falu, Mambila, Nepa, Old Government House and Benue, with fifty percent of them located in Karewa Ward, Yola North LGA while tthe rest spread across the State Capital.

The contract he said has been awarded to a competent international contractors, Mssr Batco CMC Africa Limited. Governor Ahmadu Umaru Fintiri hinted that his administration will begging construction of flyover bridge in the State Capital.

“Our administration intended to mobilise and ensuring to modernise the road transportation network in the metropolis by introducing fly-overs in critical locations in order to give traffic flow especially at peak time”, Governor Fintiri hinted.

“As we continue to prudently use the lean resource available, we assure you every nook and cranny of Adamawa State will continue to enjoy the Fresh Air we promised”. He enjoined the contractor to ensure construction of qualitative and timely delivery of the project.
The 8.1km roads will cost over five billion naira.

On his part, the Honourable Commissioner Ministry of Works and Energy Development, Alh. Adamu Atiku Abubakar, while delivering his welcome address, he explained that the roads awarded for construction are categorise in to eight lots.

The representative of Mssr Vatco CMC Africa Limited, Nabil Suliba has said that his construction firm has already started mobilising to the site and the team of their surveyors will continue to survey the sites throughout the holiday period of Christmas and New Year to finish all the necessary designs while they finalise their mobilisation.

He thanked the led administration of Governor Ahmadu Umaru Fintiri for given them opportunity to work for the State while assuring their commitment to the development of the local skill and capability through their local content plan consisting of the engagement and training of local workers from within the host community.

In their separate goodwill messages the District Head of Jimeta Dan Iya Adamawa, Alh. Muhammadu Inuwa Baba Paris and the State Chairman Peoples Democratic Party Barr. A. T. Shehu applauded Governor Fintiri on his laudable developmental projects in the State and urge the beneficial community to give the contractors maximum cooperation to enable them execute the contract hitch free.