The Honourable  Minister  for Communications and Digital Economy,  Professor  Isa Ali Ibrahim  Pantami has called on all ties of Government to Leverage on Digital Economy as a panacea for socio-economic development of the  Country.

The Communications  Minister  was speaking during the  7th Regular Meeting of the National Council  on Communications and Digital Economy held at the Banquet Hall of the Government House Gombe, Gombe State.

According to the  Minister,  no nation can develop without engaging on Information and  Communications Technology, and urged Nigerians to embrace and implement the provisions the Nigeria local content policy of the  Federal Government in all MDA'S and private sectors of the economy. He  explained that  this was to  ensure  nation wide  adherence  to the specific focus on the Four areas of ICT  namely,  Services, Software, Human Capital  development  and Hardware.

Professor Pantami  however  informed the participants that the recent change in the  Ministry's name by President Muhammadu Buhari  was an upshot of the fact  that Information and  Communications Technology  remained  one of the key pillars of the country's economy  in terms of contribution to the nation's GDP. 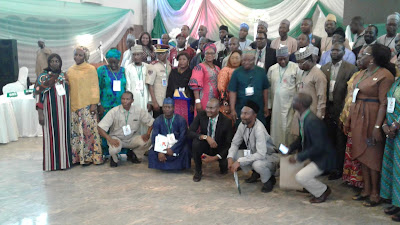 The Digital Minister  also  revealed that the digital economy  is expected to  continue  growing  with out development of new ideas,products,and services as well as  new markets  and job opportunities

While  declaring the  Council  meeting  open, the  Executive  Governor of  Gombe State,  Alhaji  Muhammad  Inuwa Yahaya who was represented by  his Deputy  Dr. Manasah Daniel  Jatau  welcomed the participants to the 7th Regular Meeting  ,explaining that the  Theme for this year's  Council Meeting " Leveraging the Gains  of ICT  in developing and Implementing a Digital  Economy Strategy for Nigeria " was not only apt but was also a step in the  right  direction  towards ensuring that  Nigeria  takes its rightful place in the comity of advanced nation's.

In his remarks  the Permanent Secretary Ministry of  Communications and Digital Economy,  Dr. Musa Fuktur  Istifanus expressed  his profound appreciation  to the people and Government  of Gombe State for hosting the week-long event.

The  Federal  Permanent Secretary  explained that it is in  recognition of this fact that Government  decided to  re- Designed  the Federal  Ministry of  Communications as the Federal  Ministry of  Communications and Digital Economy  with a mandate to develop and implement a harmonized  and well coordinated digital  economy policy and  Strategy for Nigeria.

Dr. Musa  Istifanus said that the  policy  thrust of the Ministry is clearly to articulate  government's  intention a number of thematic areas amongst which are Local content  development, ICT  Research, Development and Innovation,  Investment and  Funding, Inter Agency cooperation in ICT, ,Hardware production, Universal  access  and service internet and Broadband.

He also pointed out that the Ministry  is fully committed to integrate ICT's into the socio-economic development of  Nigeria  in order to transform the country into a knowledge based economy, stressing that  Connectivity, Capacity  building and Inter-agency  collaborations  are key factors that will bridge the digital divide and enhance Technology development  across the nation.

Adamawa State  delegation led by the  Permanent Secretary Ministry of Information and Strategy,  Alhaji  Salisu Bakari Buba and other Directors  from the  Ministry   presented a memoranda No. NCCDE 2019  (07)/ 24 entitled " The  need to develop an integrated  Electronic  mechanism  ( Telecom  and Internet  ) to Track Crime and Criminal  Activities in the Country  "

During the  Council  meeting,  the Adamawa  Delegates had informed the Council  members that the  purpose of the  MEMO is to seek the Council's endorsement of the draft, national ICT strategic plan for further consultations  and processing  and also requested the council to note the importance of Technology in prevention of criminality and other vices and to assist security agencies on enforcement of tracking mobile devices and other related Technologies  in order to  curb criminality and other negative vices in the Country.

Also  in her vote of thanks, the Honourable Commissioner Ministry of Science, Technology  and Innovations Gombe State  Dr. Aishatu  Umar Maigari  thanked all those who  afford the  7th Regular Meeting of the National Council on Communications and Digital Economy as success at Gombe State  and hope that all the recommendations would be  implemented  from the  States and  at Federal  level .

During the  week long event, the  Council had received  a total of  92 memoranda out of which  86 were considered after extensive deliberations .

At the  policy  season headed by the Honourable  Minister of Communications and Digital Economy Professor Isa Ali Ibrahim Pantami, the  event  also featured a states ICT  Peer Review season  as well as exhibitions  of various ICT  related products and services by different  government MDA'S  and other private sectors.

The  National Council on Communications and Digital Economy is a yearly event  that attracts  all states  Commissioners  in charge of ICT from the States  of the Federation as well as  stakeholders the Nigerian ICT  sectors.

The  8th Council Meeting has slated to hold at Imo State in the year 2020.