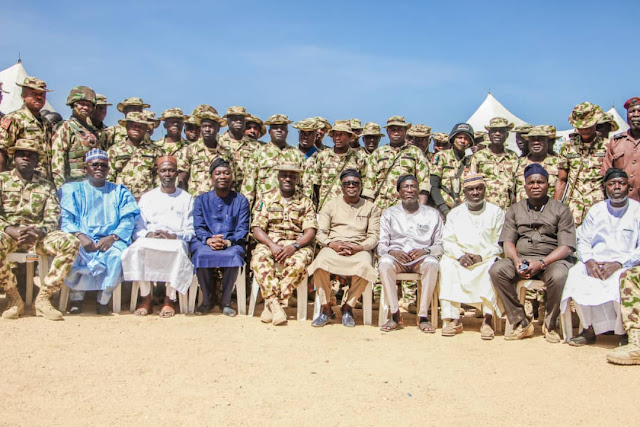 By Barnabas Augustine
30/01/2020
Governor Ahmadu Umaru Fintiri has visited gallant 144 Battalion of the Nigeria Army fighting Boko Haram in Adamawa State and rated the Army the best in Africa despite its numerous challenges.
The Governor who visited the soldiers at their base in Madagali in Magadali in Local Government Area said that the motive behind his visit was to show his administration’s appreciation to the gallant soldiers at the war front and to dine with them.

He applauded Nigeria Army for protecting the territorial integrity of Nigeria while noting their effort which has greatly minimize attack on Madagali Community and environs.

The number one citizen of Adamawa explained that his administration has being partnering, supporting and providing incentives to the soldiers fighting insurgence in the State.

While assuring his administration continue support to Nigeria Army, Governor Fintiri informed the soldiers that their host communities of Madagali and Michika Local Government Areas are in their full support for them to get rid of the insurgents.

He call on the soldiers fighting insurgence to use their vast experience to give some degree of tolerance to the civilians in the course of executing their constitutional responsibilities.

Governor Ahmadu Umaru Fintiri thanked President Muhammadu Buhari for supporting Nigeria Army to bring to an end the activities of Boko Haram in the North East. And, also thanked the Chief of Army Staff, Lt Gen. Tukur Buratai for his support to the Nigeria Army.

In his vote of thanks, the Commanding Officer 144 Battalion, Lt. Col. Usman Abdulsalam thanked Governor Ahmadu Umaru Fintiri for paying them such a visit, noting that it will go along way to boost the morale of the soldiers at the war zone.

He assured Governor Fintiri his Battalion resolute allegiance to discharge their duty accordingly in the war front.

Lt. Col. Abdulsalam thanked Governor Ahmadu Umaru Fintiri for supporting the Army which he describe him as a Governor who is actualizing the Chief of Army Staff vision. And, the Governor has become a role model.
07:40
Adamawa Daily Reports
SECURITY
Email ThisBlogThis!Share to TwitterShare to Facebook