Home » News » UPDATE ON EDUCATION;;OBJECTIVE OF BESDA IS IN LINE WITH THE POLICY DIRECTION OF MY ADMINISTRATION- GOV FINTIRI

UPDATE ON EDUCATION;;OBJECTIVE OF BESDA IS IN LINE WITH THE POLICY DIRECTION OF MY ADMINISTRATION- GOV FINTIRI 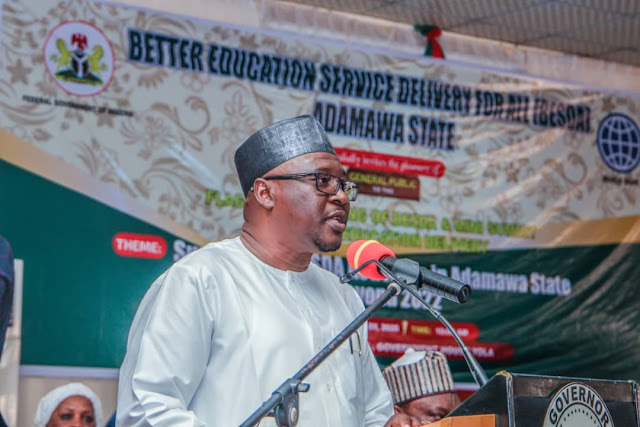 Governor Ahmadu Umaru Fintiri has said that the objective of the Better Education for Service Delivery for All, BESDA is in line with the objective policy direction of Adamawa State Education policy. The Governor said this at the flag off ceremony of BESDA in Adamawa State at the Banquet Hall in Government House Yola.

“We are implementing free education at basic and post basic education level, free education to be acceptable by all, qualitative and transparent, and these are objectives of BESDA”. Governor Fintiri said.

“Having realizing the connection between BESDA and our education policy, I directed the implementation of BESDA in the State just two months after assumption of office.
“In fact, the State started funding the activities prior to early support of BESDA programme ”.

The Governor stressed that one of the gigantic plan put in place is an acceptable integration model programme for the “Sangaya Schools” in which they are discussing with traditional rulers and other key actors on how to best implement the programme.

And, in the State 51,205 girls and almajiri were enrolled into non formal learning centres for 2019/2020 from 12 Local Government Areas in the State.

The enrolled pupils are retained for nine months in learning centres before they will be enrolled into conventional education system, Governor Fintiri explained.

Adding that his administration has provided different forms of incentives for both the pupils and their parents or malams.

On improving the quality of early grade education, the Governor said that his administration has targeted 56,331 primary one pupils and over 2,000 teachers from 949 schools in ten Local Government Areas for the education programme for this year.

Governor Fintiri maintained that in order to ensure transparency and accountability his administration has plan to supply digital equipment to all primary and secondary schools in the state which are to be used for monitoring and data procession.

Governor Fintiri therefore acknowledge the support of the Federal Government and World Bank for their laudable education support programme in the state while assuring his administration’s unflinching support for BESDA in Adamawa.

The Minister of Education, Mal. Adamu Adamu thanked Governor Ahmadu Umaru Fintiri for keying in to BESDA progrsmme in Adamawa State and the  World bank for providing Nigeria with $611b loan for the Universal Basic Education programme, enrolment of out of school children and development of children in Nigeria through other similar programmes.

Represented by Minister of State, Chukwuemeka Nwajiuba, noted that education is critical to national development and no nation will rise above its level of education while outlining the decay in the education sector which include among others inadequate qualified teachers, infrastructural decay and poor funding.

The minister explained that launching of BESDA programme was informed by the reports that Nigeria has highest number of out of school children in Sub-Sahara Africa.

Contributing, the National coordinator of BESDA Prof Gidado Tahir said the programme has come to stay in the country so far yielding positive results in the focal seventeen states of the country.

He hinted that BESDA is funded by the World Bank and sponsored by the Federal Government of Nigeria for equitable access to out of school children.

Professor Tahir said that the programme has so far identified over 100,000 out of school children in 2019 and enrolled 51,205 in various learning centres in 12 LGAs in Adamawa State which the beginning of achieving education for all in the State.