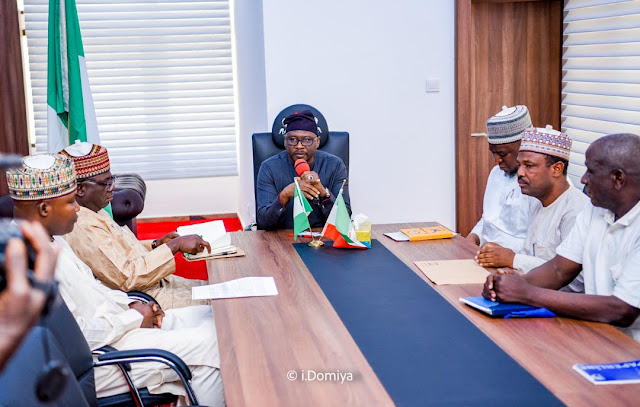 The Governor said this while playing host officials of the Federal Support Project Unit on a courtesy call in his office at the Government House Yola.

Governor Fintiri said that the project has  the critical need of the people and that is where the heart of the Government is. Adding that, that is the concern of the vulnerable and the poor in the various communities in the State and his administration  will  hesitate to do what will improve the lives of its good people.

He assured to work with the World Bank and other donor agencies to sustain the programme for the benefit of good people of Adamawa in rural areas so as to improve their lives and curtail rural-urban migration.

Governor Ahmadu Umaru Fintiri urge the communities that have benefited from the projects to make good use of them as they will take ownership while thanking initiators of the programme.

Earlier in his address, the National Coordinator, Federal Project Support Unit, Dr. Abdulkareem Obaje said that they were at Government House Yola to thank Governor Ahmadu Umaru Fintiri for the speedy contribution he made to the State CSDA.

Dr. Obaje said that since the inception of CSDA in the State in 2009, the State Government has made contribution of millions of naira that help to execute  447 micro projects for the poor and vulnerable in rural communities.

The National Coordinator explained that the project which has been introduced to State in 2009 will come to an end in June, 2020 and that World Bank does not allowed its project to stay for more than two circles of five-five years, which it has been exhausted. He therefore hinted that there are plans by the World Bank to start a new programme probably after July 2020.

Dr. Obaje appeal to the State Government to support Adamawa State Community and Social Development Agency as soon as the World Bank funding come to an end in June and the staff of the agency be retained for the job for they are well trained.

He also appeal to the Governor to replicate the CSDA project in all the 21 Local  Government Areas of the State; praying that Adamawa will be the first state in Nigeria to replicate it as they have already have 11 focal Local Government.
00:17
Adamawa Daily Reports
News
Email ThisBlogThis!Share to TwitterShare to Facebook