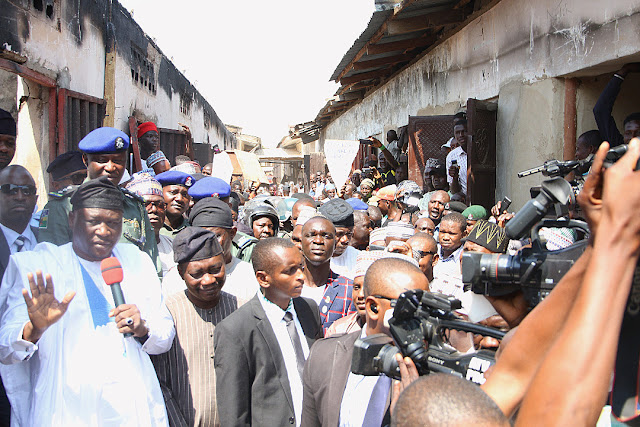 Governor Ahmadu Umaru Fintiri has on Tuesday sympathize with the victims of inferno at Ganye
market in Ganye Local Government Area.

The Governor who was accompanied by high Government Officials visited the market where
fourteen shops were raised down by fire on Saturday.

Adrressing the traders shortly after going round the market to see the level of damage which the fire
caused on the affected shops used by the readers as warehouses, Governor Fintiri admonished the
victims to take it as an act of God and pray that such calamity will not befall them again.
The Adamawa State Governor call on Ganye Local Government Council to urgently renovate the
burnt shops to enable affected traders return back to their normal businesses.
He therefore made announcement of donation of four million naira by Adamawa State Government
to the affected victims of the inferno.

Speaking to our reporter who was with the Governor’s entourage, one of the victims who give his
name as Mallam Misa thanked Governor Ahmadu Umaru Fintiri for not only visiting the market to
see for himself the level of damage which the fire made on their shops, but made donation of huge
sum of money to cushion their hardship.

He appealed to the authority that the money will be given to for distribution to the victims, to
distribute it judiciously to the affected traders, stressing that the fire has consumed their stored
produce worth millions of naira.

It could be recall that on Friday, Governor Ahmadu Umaru Fintiri visited Loko community in Song
Local Government Area over fire outbreak that engulfed many shops and made donation of three
million naira to the victims.

Earlier at the palace of Gangwari Ganye, Governor Ahmadu Umari Fintiri while paying homage,
explain to the royal father that his administration has fulfilled its promises made sometimes at the
palace by completing the 7 kilometre uncompleted Ganye Township Road while assuring more
dividends of democracy in Ganye Chiefdom.

He further assured the people of Ganye Chiefdom an upgrade of Ganye General Hospital with
modern health facilities to make it a befitting referral centre.

He lauded the policies of the Governor of free education, the new security architecture which he
said is yielding positive results and the infrastructural development in Ganye Chiefdom.
The Royal Father appeal to the Governor to strengthen Security in the mountainous areas of the
Chiefdom which he said has become a hideout for criminals.

While at Ganye General Hospital where he inspected the health facilities and promise its upgrade,
Governor Fintiri lauded the gesture of the Senator representing Southern Zone in Adamawa State,
Sen. Binus Yaroe for his ongoing free medical outreach to the people of the zone at the Ganye
General Hospital describing it as a relief to his people who have no means to pay their medical bills.
00:47
Adamawa Daily Reports
News
Email ThisBlogThis!Share to TwitterShare to Facebook