Home » News » NEWS;Gov Fintiri Condoles EYN Family Over Killing of Rev Lawan, Assure Support to the Family as Requested by the Slayed Father

NEWS;Gov Fintiri Condoles EYN Family Over Killing of Rev Lawan, Assure Support to the Family as Requested by the Slayed Father 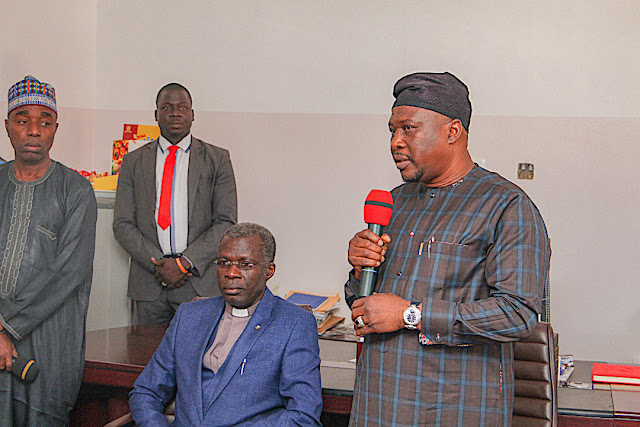 The Governor who was accompanied by top Government officials, made the assurance Thursday
while condoling the National President of the church and its entire congregation. The number one citizen of the state said that his administration will work with the family and
provide some palliative to the children as their slayed father requested in the short video released
before he was killed by his captors, Boko Haram terrorists.

While expressing his heart felt sympathy to the EYN family, Governor Fintiri described the deceased
as a person he personally know, he was dear to him and he has contributed immensely to the
success of his administration.

Governor Fintiri revealed that few days after his inauguration as the Governor of Adamawa State, his
administration has introduce new security architecture which is yielding positive result and
communities that were hitherto in friction are now living harmoniously.

He further assured that his administration will continue to give maximum support and cooperation
to security agencies so as to safeguard the lives and properties of its citizenry.

Responding, the National President of EYN, Rev. Joel Billi thanked Governor Ahmadu Umaru Fintiri
for the condolence and his concerned over the Church. Noting that since the day Rev. Andimi Lawal
was abducted, the Governor has not relent in his effort to ensure his release; he constantly call and
send text messages to the church President to that effect.

Rev. Billi explained that the church went on prayers and fasting to God to turn the heart of the
captors of late Rev. Andimi Lawan to release him, but God allowed the ugly incident to happened,
which they cannot questioned Him why.

The clergy described Governor Fintiri as a man who did not relent in his effort in fighting
criminalities; adding that since his inauguration, he has not stayed a fourth night without visiting
Local Government Areas that were attacked by the insurgents.
Earlier Wednesday,