PRESS RELEASE;“WE ALL MUST OWN THIS CITY” …FCT MINISTER CHARGES MEDIA/ STAKEHOLDERS 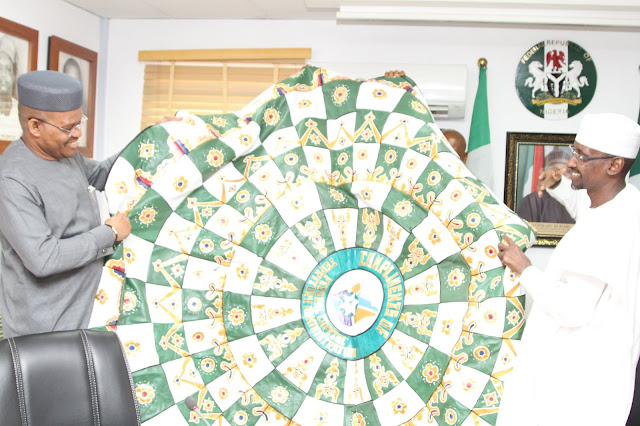 The Minister, Federal Capital Territory (FCT) Malam Muhammad Musa Bello has called on the media, residents and other stakeholders in the Abuja project to join hands with the FCT Administration to build the federal capital of their collective dreams.

The Minister made the call when he received the management of DAAR Communication PLC, led by its Group Managing Director, Mr. Tony Akiotu, on a courtesy visit to the FCT Administration.

At the meeting, which was at the behest of the media outfit, the FCT Minister stressed the need for all stakeholders to own the Abuja project and work towards safeguarding all infrastructure and facilities deployed by government over the years.

In the words of Malam Bello, “The crux of the matter is that we all must own this city… your home is Abuja…therefore you have to own Abuja. This city was built from the scratch by collaborative engagement of the stakeholders over the years”.

He said “While government can provide the best roads and state of the art facilities, at great cost, it behooves on all residents and other stakeholders to own these projects and protect them from vandals and other unscrupulous elements aiming to destroy them.

Malam Bello also reminded residents that they have a lot at stake in the FCT since the likelihood of their children remaining in the city and making it their home is quite high.

The Minister stressed the need for Nigerians to always have the right perspective on issues, adding that it is the responsibility of the media to provide that perspective.

Malam Bello urged the media to be diligent in the reportage of events while charging them to do more of investigative journalism to expose negative elements determined to bring the country down. He also stressed the need for the media to focus more on exposing such corrupt and criminal minded individuals and groups set on tearing down institutions.

He charged the media to differentiate between individuals and institutions in their reportage, adding that, “We should never bring down institutions because they represent our values and our humanity”
Malam Bello commended DAAR Communications for its service to country.
Earlier, Mr. Akiotu had commended the Minister for delivering on the dividends of democracy to Abuja and its residents, which, according to him, resulted in his reappointment as FCT Minister by Mr. President for a second term.
He pledged the support of his organization for activities of the FCTA towards the growth and development of the FCT and the people.
The GMD however said “People need to know why some projects are prioritized while some are delayed”, adding that such knowledge will make the people appreciate more, the challenges public office holders face in the discharge of their mandate and bringing development to them.