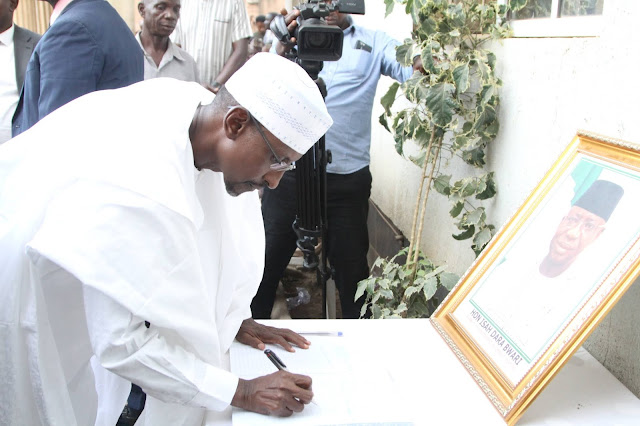 Minister of the Federal Capital Territory, Malam Muhammad Musa Bello has paid glowing tribute to the late former Chairman of Bwari Area Council, Hon. Isa Dara, who died on Monday January 20, 2020, describing him as an elder statesman, peacemaker and gentleman.
The FCT Minister led an entourage of prominent FCT citizens to Bwari on a condolence visit to the family of the late politician as well as  the Etsu Bwari in his palace on Tuesday, January 21 2020 .
The Minister said late Isa Dara was a friend and colleague who always advocated for peace in the Bwari Area Council. He said it is to Dara’s credit that Bwari Area Council is today peaceful and not witnessing the imposition of a curfew.
The Minister specifically recalled the role that late Dara played when crisis erupted in the Council, a couple of years ago saying that the late Dara was the lone voice that was always seeking for peace and dialogue that eventually helped to calm the situation.
Malam Bello also recalled his time working with the former Chairman who served under his Administration as a Special Adviser noting that late Dara was very active during the 2016 electioneering campaigns in the FCT.
The Minister, while praying that God Almighty will grant the family and the entire people of Bwari Area Council the fortitude to bear the loss, also used the opportunity to sue for peace and understanding  amongst the people of the Council. He said countries and communities are built only in a tranquil and peaceful atmosphere.
Welcoming the Minister to the palace, the Chairman, Bwari Area Council, Dr. Shekwogaza Gabaya, lamented that the Council had lost two prominent sons in Isa Dara and Peter Yohanna, the latter also a former Chairman of Bwari Area Council who also passed on about a month ago.
The Chairman recalled a recent meeting he had in the Council where the late politicians assured him of their full support towards his success, and regretted that their passing had left a vacuum that will be difficult to fill.  He said the entire residents of Bwari Area Council are deeply saddened by their deaths.
The Esu Bwari HRH Ibrahim Yaro (JP) who also described the late Chairmen as great politicians, equally prayed for the repose of their souls.
In his remarks, a former member representing AMAC/Bwari Federal Constituency in the House of Representatives Hon. Zaphaniah Jisalo also described the Late Isa Dara as a man of peace who was well loved by his people. He called on the people of the Area Council to always remain peaceful.
Other dignitaries who were on the Minister’s entourage  included the Chairman, FCT APC, Hon. Abdulmalik Usman, FCT APC Women Leader, Mrs HailMary Aipoh former Senior Special Assistants to the FCT Minister, amongst others.
It would be recalled that late Hon. Isa Dara was Chairman of Bwari Area Council between 2004 and 2010 serving two terms as Area Council Chairman.
His last appointment was as Senior Special Assistant to the FCT Minister on Community Relations between 2016 and 2019.