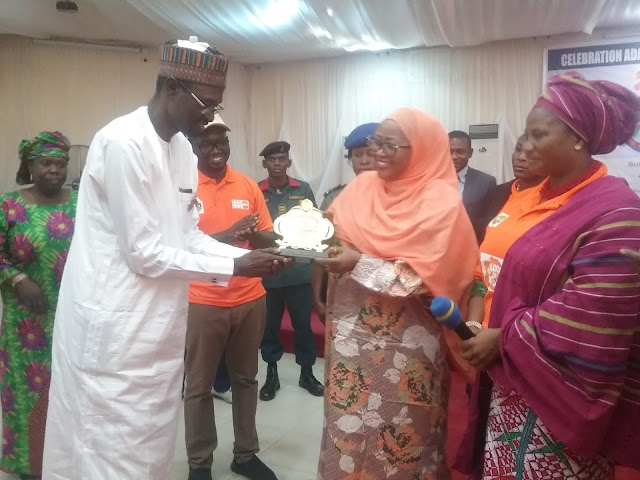 The event took place at banquet hall, in Government House, Yola. The event marks the end of 16 days of activism for the year 2019.

In their separate goodwill messages at the event, the Programme Officer of United Nations Population Fund Mr. Danladi Idrissa, commended Governor Ahmadu Umaru Fintiri, and his wife for their fight against all forms of violence against women and girls in the state. He maintained that the award is a deserving one to the first lady because of her passion in championing the course of women and girls, sighting an example on her concern on the case of a five year old girl who was raped months ago, who was admitted at Federal Medical  Centre, she immediately reacted against it and promised to ensure the perpetrator did not go unpunished. 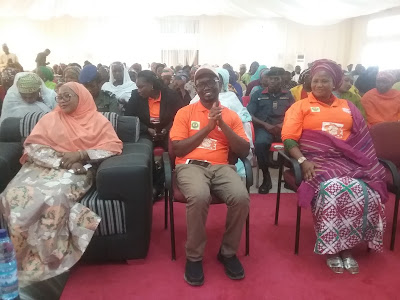 He further stated that as a result of that  the entire GBV sub sector  group and Ministry of women affair and social development deemed it worthy to award her as GBV champion in the state.

Also, the chief of staff Mr. Maxwell Gidado, in his, remarks congratulated the Governor’s wife for the deserving award. He also lauded  the efforts of Ministry of Women Affairs for protecting and promoting the plight of women in the state.

Furthermore, the Secretary to the state government, Mal. Bashir Ahmed, also congratulates the awardee and reiterated that the present government have planned to give equal  educational opportunities to women and girls in order to improve their socio economic status.

The Speaker of the State House of Assembly, who was represented by the Member orepresenting Demsa Local Government Area, Mrs. Kate Raymond, rejoices with Haj. Lami Fintiri. Mrs. Raymond assures passage of child’s rights Act in the House of Assembly. 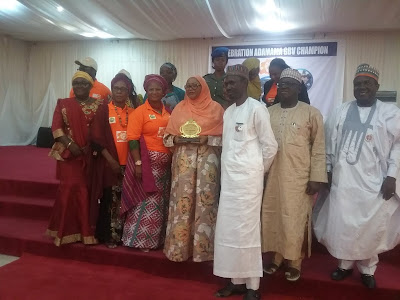 While expressing her appreciation, the Governor’s wife dedicated the award to God and those women and girls who lost their lives to Violence. She thanked UNFPA and other donor agencies for considering her worthy for the award.

Lastly, the Hon.Commissioner Ministry of Women Affairs and Social Development, Mrs. Lami. Patrick, thanked the state government for providing an enabling environment for donor agencies to discharge their duties in the state.
17:10
Adamawa Daily Reports
Special Report
Email ThisBlogThis!Share to TwitterShare to Facebook