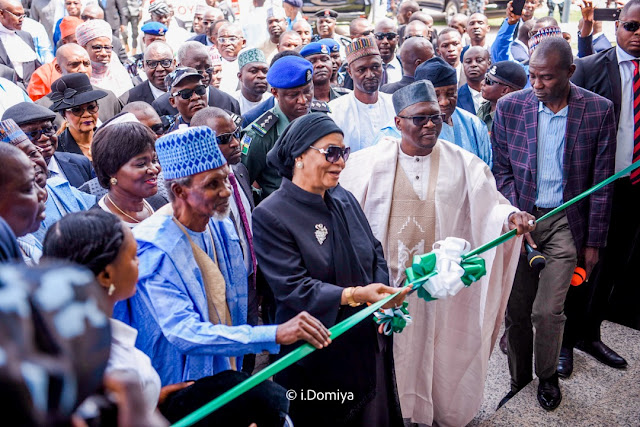 Performing the ceremony at the Court of Appeal Complex along Justice Buba Ardo Road, Jimeta-Yola, Governor Fintiri noted that the commissioning of the Court of Appeal Yola Division for the two States come at a better time that concerted effort is being made towards the repositioning of the judicial system in the country, which is the last hope of the common man.

“We in Adamawa and Taraba State will assist the Division by providing the enabling and conducive environment in ensuring their work and stay in the State, more satisfactorily” Governor Fintiri said.

“As a Government, we will liase with the presiding Justice of the Court of Appeal to determine the immediate needs of the complex with a view to assisting in the provision of such needs”.

She further said that the Court of Appeal Yola Division until its present location was located at the Women Development Center in Yola since 2010. And, express her delight for the support Adamawa State Government rendered to them especially in provision of housing accommodation for the senior staff.

Justice Bulkachuwa explained that the Court of Appeal Complex building commissioned has among other things: Library, Offices, Court Halls, Press Gallery and Litigation Halls. She thanked Senate and House of Representatives committees on Judiciary for approving their appropriation budget, the National Judicial Council for timely disbursement of funds for the completion of the Court, the NBA and all other associations that contributed in one way or the other.

Earlier in her welcome address, the Presiding Judge, Court of Appeal Yola Division, Justice Chidi Nwaoma Uma said that the Court of Appeal built Yola Division is a landmark in Yola and North East. She applauded the effort of Honourable Justice Bulkachuwa for completing and commissioning the Court before retirement.

There was a session for tribute in which the President Court of Appeal of Nigeria, Honourable Justice  Zainab Adamu Bulkachuwa was honoured by members of the Nigeria Bar Association Adamawa and Taraba States, Justices and Senior Judicial officers for her selfless service before her retirement by age in March this year.
11:33
adamawadailyreport@gmail.com
News
Email ThisBlogThis!Share to TwitterShare to Facebook