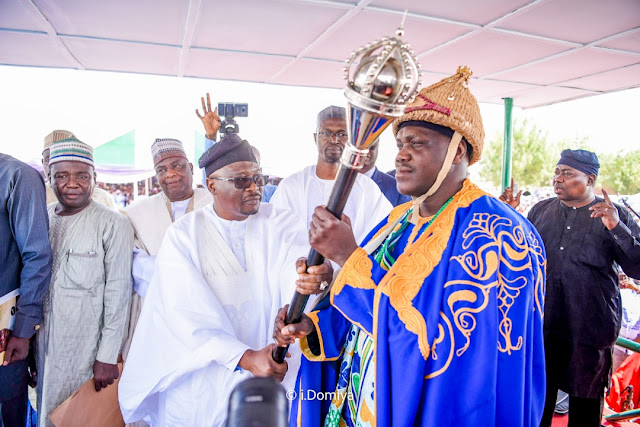 While presenting staff of office to the First Class Chief at the Dishon Dansanda Square Guyuk in Guyuk Local Government Area, Saturday, Governor Fintiri described the event as unique and historic, adding that it has been designed to fulfil the wishes and aspiration of the entire Lunguda Chiefdom who were anxiously looking forward for the day that staff of office will be presented to their First Class Chief.

The Governor noted that the vacuum created by the demise of the 16th Kwandi Nunguraya, HRH Dr. Wilfred K. Kimde in the Lunguda land was the will of God.

Governor Fintiri congratulates the King Makers of Lunguda Traditional Council and the entire Lunguda people for the maturity they exhibited during the processes of selecting their First Class Chief. He noted that the spirit of oneness and brotherhood which guided the exercise is a commendable one.

He charge the Kwandi Nunguraya to exhibit an exemplary leadership style to his subjects who turn en-masse, supporting his ascension to the throne.

The Governor enjoined the monarch to be a promoter of  Ethnic, social and religious harmony which  he said cherishes love, respect and justice to all.

As custodian of culture, Governor Fintiri said that the traditional rulers has dynamic role to play at the grass root which include meaningful economic activities and self-help projects which will uplift the standard of living of their subjects. He encouraged people to avoid idleness and criminal activities that is thwarting development in the North East region.

Governor Ahmadu Umaru Fintiri seek the cooperation of people for the traditional rulers and the Government so that all and sundry will contribute to the development of the larger community that will be proud of.

The number one citizen of the State assured his administration’s continuity to accord strong support and work with the traditional institutions in maintaining the security and communal co-existence.
While explaining the resolve of his administration for open door policy, the Governor call on the elites to always give traditional rulers advise that will promote the welfare and peaceful coexistence of their people.

“I accept the destiny which ordained that henceforth, I shall be the embodiment and expression of the culture, aspiration, history and will of the Lunguda People and indeed all the other different tribes who are part of us”, Kwandi Nunguraya said.

While thanking Governor Ahmadu Umaru Fintiri for fulfilling his promise to the Lunguda people, Kwandi Nunguraya said that the Governor did what is legally right in conformity with tradition but most importantly, fulfilling the will of the people.

Kwandi  Nunguraya call on all Lunguda people to rally support for him for the progress of the chiefdom.

“I therefore declare a clarion call on all Nunguraba sons and daughters where ever they may be , especially the Wala Lunguda, Jessu and Delle Districts of Lunguda in Balanga LGA of Gombe State to unite and let us build an egalitarian community” the First Class Chief enjoin Lunguda people.

“I am only a bridge, a link and a voice for us all. My doors are open always for anything good for the good of all”.
The oath of office to the Kwandi Nunguraya, Kuruhaye Dishon Dansanda II was administered by the Honourable Commissioner of Justice and the Attorney General of Adamawa State, Barr. Afraimu A. Jingi.

Highlight of the occasion was paying of homage to Kwandi Nunguraya and march pass by various cultural troupes in Lunguda land and neighbouring kingdoms.
10:43
Adamawa Daily Reports
News
Email ThisBlogThis!Share to TwitterShare to Facebook